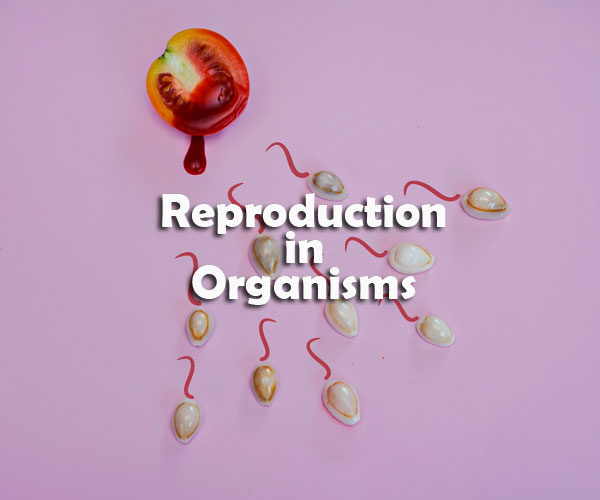 MCQ Questions on Reproduction in Organisms

1. A true fruit is the one in which the fleshy part of the fruit is derived from-
A. Thalamus
B. Ovary
C. inflorescene axis
D. apocarpous gynoecium

2. A few plants exhibit unusual flowering phenomenon, which of them flower only once in their life time, generally after 50-100 years and produce large number of fruits?
A. Strobilanthus Kunthiana
B. Bamboo
C. Calistemon linearis
D. Cymbopogon reptocus

7. Marchantia is considered heterothallic because it is
A. Heterogametic
B. Bisexual
C. Monoecious
D. dioecious

9. Adventitious buds at the leaf notches help to propagate the plant of—
A. Potato
B. Agave
C. Bryophyllum
D. Cactus

13. Zygote is formed by the process of—
A. Isogamy
B. Anisogamy
C. Oogamy
D. Syngamy

14. The motile reproductive structure of algae and fungi, which directly give rise to new individuals are called—
A. Zygospores
B. Zoospores
C. Cysts
D. Conidia

18. In which set of Organisms does external fertilization occur-
A. Echinodermata and mosses
B. Hemichordata and ferns
C. Amphibians and algae
D. Reptiles and gymnosperms

20. Which one is common to multicellular fungi, filamentous algae and protonema of mosses _____
A. Diplontic life cycle
B. Members of kingdom plantae
C. Multiplicaion by fragmentation
D. Mode of nutrition

21. Which one of the following is correctly matched?
A. Onion Bulb
B. Ginger-Sucker
C. Chlamydomonas—Conidia
D. Yeast—zoospores

23. Banana is vegetatively propagated by—
A. tubers
B. rhizomes
C. bulbs
D. suckers

28. Common between vegetative reproduction and apomixis is—
A. both applicable to dicots
B. both bypass flowering phase
C. both occur around the year
D. both produce progeny identical to parent.

32. Petiole is used in multiplication of—
A. Bignonia
B. Saintpaulia
C. Sansevieria
D. Pepromia

33. Regarding fertilization which among the following statements is incorrect—
A. It restores diploid condition in the zygote.
B. It activates egg both physiologically and metabolically.
C. Paternal and maternal sets contribute to the diploid number without causing any variation.
D. It determines the sex of the offspring.

34. Which among the following statements is correct to indicate the difference between sperm and egg—
A. Cytoplasm in sperm is more abudant than in egg.
B. Accessory membranes are absent in sperm but present in egg.
C. Nucleus is clear in sperm and very compact in egg.
D. Mitochondria from a sheath in egg and diffused in sperm.

36. Micropropagation is a technique for production of —
A. true to type plants
B. haploid plants
C. somatic hybrids
D. somaclonal plants

39. Identify the correct statement-
A. Because of marked climatic variations, plants growing near the sea shore do not produced annual rings.
B. The age of the plant can be determined by its height.
C. Grafting is difficult in monocot plants as they have scattered vascular bundles.
D. Healing of damaged tissue is because of activity of sclerenchyma cells.

42. Zygotic meiosis is characteristic of :
A. Marchantia
B. Fucus
C. Funaria
D. ChIamydomonas

43. Which one of the following statements is not correct?
A. Offspring produced by the asexual reproduction are called clone.
B. Microscopic, motile, asexual reproductive structures are called zoospores.
C. In potato, banana and ginger, the plantlets arise from the internodes present in the modified stem.
D. Water hyacinth, growing in the standing water. drains oxygen from water that leads to the death of fishes.

46. Which among these is not a post-fertilisation event?
A. Fruit formation
B. Gametogenesis
C. Seed formation
D. Embryogenesis

47. Flowers are unisexual in—
A. Pea
B. Cucumber
C. China Rose
D. Onion

49. Stock and scion are used in—
A. Cutting
B. Grafting
C. Layering
D. micropropagation

50. Which of the following Organisms breeds only once in lifetime?
A. Bamboo
B. Oysters
C. Pelagic fishes
D. Birds

51. The chromosome number in meiocyte is 34. The Organisms could be—
A. ophioglossum
B. dog
C. onion
D. apple

53. Select the incorrect match out of the following-
A. Offset — Potato
B. Runner — Grass
C. Stolon — Jasmine
D. Sucker – Chrysanthemum