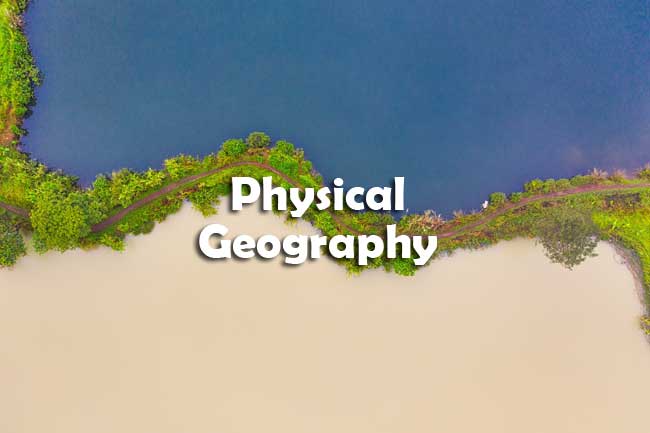 All these questions on Physical Geography are collected from previous year papers and compiled by us.

Questions and Answers on Physical Geography

1. In order to prevent the expansion of deserts, trees are planted in strips or blocks with the shortest trees on the desert side and tallest on the other side. Such plantation is called?
(A) shelter belts
(B) agroforests
(C) wind breaks
(D) social forests

2. The food chain refers to the transfer of energy from :
(A) the interior of the earth to the surface
(B) lower to higher latitudes
(C) one organism to another
(D) organisms of the land to those of the sea by means of river

3. The presence of a lion in the forest is essential in order to
(A) keep the trees safe from felling
(B) add beauty in the forests
(C) save the pastures from being overgrazed
(D) keep other carnivorous animals away

4. Which one is not a non-conventional energy source?
(A) Nuclear energy
(B) Solar Energy
(C) Wind energy
(D) Tidal power

6. Trees are leafless for a shorter or longer season of the year in :
(A) Evergreen forest
(B) Mangrove forest
(C) Scrub jungle forest
(D) Deciduous forest

9. The main cause of global climatic change is
(A) increase in the content of carbon dioxide in the atmosphere
(B) emissions of industrial gases
(C) adding of dust
(D) changes in plant cover

10. The sphere of living matter together with water, air and soil on the surface of the earth is known as
(A) Lithosphere
(B) Biosphere
(C) Hydrosphere
(D) Atmosphere

13. A special type of well in which water rises automatically under the pressure of a column of water to the ground surface through a hole is known as
(A) Artisian well
(B) Spring
(C) Hot spring
(D) Geyser

14. Which of the following oceans has the shape of the English alphabet S ?
(A) Arctic Ocean
(B) Indian Ocean
(C) Atlantic Ocean
(D) Pacific Ocean

17. The deepest ocean of the world is
(A) Atlantic Ocean
(B) Arctic Ocean
(C) Indian Ocean
(D) Pacific Ocean

18. Tides in the sea have stored in them :
(A) Hydraulic energy
(B) Kinetic energy
(C) Gravitational potential energy
(D) A combination of all the above three forms of energy

19. The deepest surface depression on the earth is
(A) Kurile Trench
(B) Mariana Trench
(C) Tonga-Kermadec Trench
(D) Bentley Subglacial

20. Echo sounding is the tech-nique applied to—
(A) measure the depth of the sea
(B) measure the amplitude of sound waves
(C) record earthquake waves
(D) record the density of air in the atmosphere

22. Atmospheric pressure exerted on earth is due to :
(A) rotation of earth
(B) revolution of earth
(C) gravitational pull
(D) uneven heating of earth

23. Which one of the following has the highest wind velocity?
(A) Typhoon
(B) Hurricane
(C) Cyclone
(D) Tornado

24. Speed of wind is measured by
(A) Barometer
(B) Hygrometer
(C) Thermometer
(D) anemometer

25. Trade winds are due to
(A) Conduction
(B) Convection
(C) Radiation
(D) Scattering

26. Ozone-hole in the atmosphere is largely caused by the presence of
(A) Oxygen
(B) Hydrogen
(C) Chloro-floro-carbon
(D) Radio-active waste

27. The term Roaring Forties is related to the
(A) Trade winds
(B) Planetary winds
(C) Westerlies
(D) Polar winds

28. The line on a map connecting points of equal temperature at a given time is
(A) Isohyet
(B) Isobar
(C) Isthumus
(D) Isotherm

29. Where does most of the weather phenomena take place?
(A) Ionosphere
(B) Troposphere
(C) Stratosphere
(D) Tropopause

30. Very strong and cold icy winds that blow in the Polar regions are called
(A) Typhoons
(B) Tornadoes
(C) Blizzards
(D) Polar winds

32. Which of the following Scientist proved that the path of each planet around the Sun is elliptical?
(A) Kepler
(B) Galileo
(C) Newton
(D) Copernicus

33. Which of the following is an alternative theory to the Big Bang theory developed in 1948, stating that the universe does not change even though it is expanding over time ?
(A) Oscillating Universe
(B) Steady State Universe
(C) Mirror Universe
(D) Eternal Inflation

34. The constellation ‘Sapta Rishi’ is known to Westerners as the
(A) Seven Monks
(B) Alpha Centauri
(C) Big Dipper
(D) Small Bear

36. Stars twinkle but planets do not twinkle because
(A) they emit light of a constant intensity
(B) their distance from the earth does not change with time
(C) they are very far away from the earth resulting in decrease in intensity of light
(D) they are nearer to the earth and hence we receive a greater amount of light and therefore minor variations in intensity are not noticeable

37. The outermost layer of sun is called
(A) Lithosphere
(B) Chromosphere
(C) Photosphere
(D) Corona

40. When does the sun shine vertically on the Equator ?
(A) Throughout the year
(B) For six months
(C) Twice a year
(D) Once a year

42. Which among the following statements is true regarding International Date line ?
(A) It is 180° Longitude
(B) It is a straight line
(C) It is a big circle
(D) It is a curved line beyond earth

46. The deposits of the ancient Tethys Sea were folded to form the :
(A) Himalayas
(B) Rockies
(C) Andes
(D) Alps

47. Which one of the following types of erosion is responsible for the formation of Chambal Ravines?
(A) Splash
(B) Sheet
(C) Rill
(D) Gully

48. The west to east extension of the Himalayas is from
(A) Indus gorge to Dihang gorge
(B) K2 to Chomoihari
(C) Nanga Parbat to Namcha Barwa
(D) Rakaposhi to Lohit river

49. Most of the devastating earthquakes are usually caused by
(A) Eustatic movement
(B) Isostatic adjustment
(C) Collision of earth plates
(D) Volcanic eruption

50. Which one of the following is the greatest circle ?
(A) Arctic Circle
(B) Equator
(C) Tropic of Cancer
(D) Tropic of Capricorn