Synthesis means the combination of more than a single sentences into one new sentence which may be either simple, complex or compound. 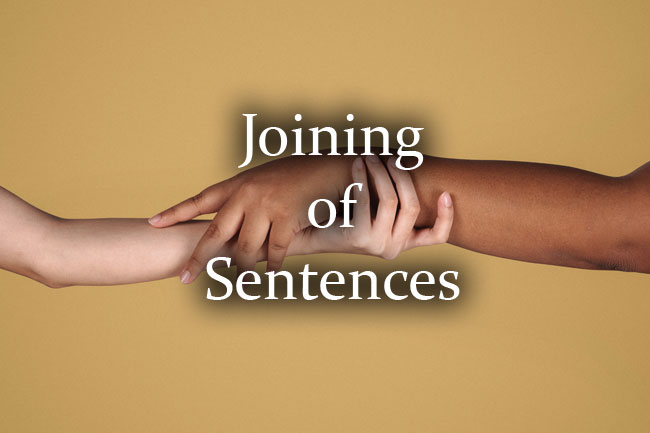 By using an Infinitive:

By using a Participle or Adjective:

(iv) I walk for health every day. I walk in the morning.
I walk every morning for health.

(v) I hear a scream. The scream is frightening.
I hear a frightening scream.

By using an Adverb or an Adverbial Phrase:

By using a Noun or a Phrase in Apposition:

By using an Absolute Phrase:

By using a Preposition with a Noun or a Gerund

Join the following pairs of sentences into Simple ones:

2. He studies hard. He wants to do well in the exam.

5. The sun went up. The fog disappeared.

6. Mr. P. Chidambaram is the Union Finance Minister. He will place the Union Budget next week.

7. Today is a holiday. I shall not go to school.

8. The train was less crowded. It was unusual.

9. Mother heard of my success. She became very glad.

10. The man was unwell. He still came to the function.

11. The match was over. We returned home.

13. I hear a scream. The scream is frightening.

14. The man has a large family. He must maintain it.

By using an Adjective Clause:

By using an Adverbial Clause:

Combine each set of Simple Sentences into a Complex Sentence:

1. He taught me a lesson. I can never forget it.

7. We reached the station. The train left after our arrival.

8. Cristiano Junior was a fine footballer. He died playing football.

9. The sun set. Then we returned home.

10. The lion is strong. The horse is stronger.

13. Anirban failed. This is unfortunate.

14. The picnic was over. We left Bandel Church.

15. Vivian Richards was a great batsman. He played cricket for the West Indies.

Simple Sentences may be converted into a Compound Sentence by co-ordinating conjunctions:

(v) He is poor. He is happy
He is poor but he is happy

Combine each set of Simple Sentences into a Compound Sentence:

4. We were hungry. We are angry as well.

5. Make haste. You will be late for school.

6. The thief was punished. He was sent to prison.

8. The car met with an accident. None was killed.

9. Rammohan Ray was a wise man. He was also a noble man.

10. The tortoise was slow. It was steady.

11. Mother was annoyed. She kept quiet.