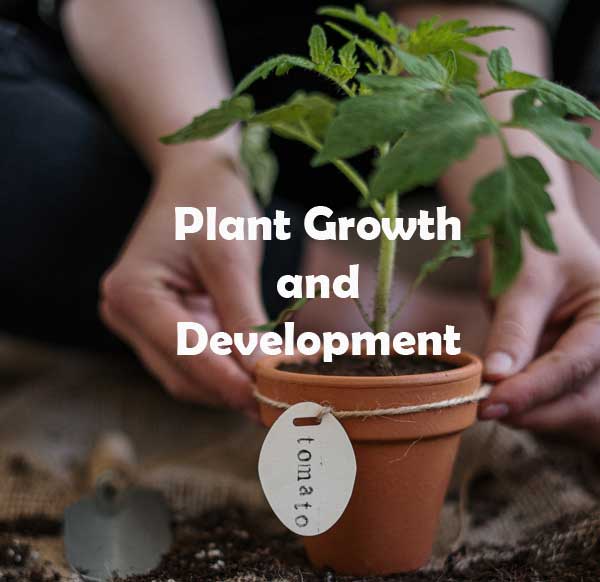 1. The phenomenon called ‘apical dominance‘ in plants is due to a phytohormone—
A. Cytokinins
B. Auxins
C. ABA
D. gibberellins

2. Gibberellins can promote seed germination because of their influence on
A. absorption of water through hard seed coat
B. synthesis of abscisic acid
C. production of hydrolysing enzymes
D. rate of cell division

5. The aleurone synthesises and secretes digestive enzymes that hydrolyse nutrients stored in the endosperm, in presence of-
A. Auxin
B. Gibberellin
C. cytokinin
D. ethylene

6. which of the following statements regarding photoperiodism is false?
A. The response of plants to periods of light/day is termed photoperiodism.
B. In day neutral plants there is no correlation between exposure to light duration and induction of flowering response.
C. Shoot apices modify themselves into flowering apices prior to flowering.
D. The site of perception of the light/dark duration is the flower.

9. Auxanometer is used to measure-
A. Growth
B. Respiration
C. Transpiration
D. ascent of sap

11. The hormone that promotes rapid elongation of internode or petiole in deep water rice plant is-
A. abscisic acid
B. ethylene
C. cytokinin
D. gibberellin

12. Which of the following plant requires light exposure less than the critical period to initiate flowering?
A. Tobacco
B. Wheat
C. Spinach
D. Oat

13. The characteristics like expansion, breaking dormancy, promoting germination and flowering are associated with-
A. Auxins
B. Gibberellins
C. Cytokinins
D. Ethylene

18. Fruit and leaf drop at early stages can be prevented by the application of—
A. Cytokinins
B. Ethylene
C. Auxins
D. Gibberellic acid

25. Horizontal growth of seedlings, swelling of the axis and apical hook formation in dicot seedlings is brought about by—
A. Auxins
B. Gibberellins
C. Ethylene
D. abscissic acid

27. During seed germination its stored food is mobilised by-
A. ABA
B. Gibberellin
C. ethylene
D. cytokinin

29. Which of the following phytohormones promotes male flowering and parthenocarpy?
A. Auxin
B. Gibberellin
C. Cytokinin
D. Abscisic acid

30. In which plant heterophyllous development occurs due to environment.
A. Coriander
B. Cotton
C. Larkspur
D. Buttercup

31. Which statement regarding growth is false—
A. Increase in mass and increase in number of individuals are twin characteristics of growth
B. In plants, growth by cell division is seen only upto a certain stage
C. Growth exhibited by nonliving objects is by accumulation of material on the surface
D. A multicellular organism grows by cell division

32. The pineapple which under natural condition is difficult to blossom has been made to produce fruits throughout the year by application of——
A. NAA, 2, 4-D
B. phenyl acetic acid
C. cytokinin
D. IAA, IBA

34. Which plant hormone is basic in nature—
A. Gibberellin
B. Auxin
C. Ethylene
D. Cytokinin

35. One set of plants of a species was grown at 12 hours day and 12 hours night period cycles and it flowered while for the other set of the same plant, night phase was interrupted by flash of light and it did not produce flower. Under which one of the following categories will you place this plant-—
A. Long day plant
B. Darkness neutral plant
C. Day neutral plant
D. Short day plant

39. Control of leaf, flower and fruit abscission and promotion of fruit reopening are functions of-
A. Ethylene
B. Auxin
C. Gibberellin
D. Cytokinin

40. Abscisic acid is known as the stress hormone because it—
A. breaks seed dormancy
B. induces flowering
C. promotes leaf fall
D. promotes closure of stomata.

41. Which one of the following generally acts as an antagonist to gibberellins?
A. Zeatin
B. Ethylene
C. ABA
D. IAA

43. A few normal seedlings of tomato were kept in a dark room. After a few days they were found to have become while-coloured like albino. Which of the following terms will you use to describe them?
A. Mutated
B. Embolised
C. Etiolated
D. Defoliated

44. Dr. F. Went noted that if coleoptile tips were removed and placed on agar for one hour, the agar would produce a bending when placed on one side of freshly-cut coleptile stums. Of what significance is this experiment?
A. It demonstrated polar movement of auxins.
B. It supports the hypothesis that IAA is auxin.
C. It is the basis for quantitative determination of small amounts of growth-promoting substances.
D. lt made possible the isolation and exact identiﬁcation of auxin.

45. Which one of the following growth regulators is known as ‘stress hormone’?
A. abscisic acid
B. Ethylene
C. GAB
D. Indole acetic acid

46. Which one of the following is a growth regulator produced by plants?
A. Naphthalene acetic acid
B. Zeatin
C. 2, 4—DichIorophenoxyacetic acid
D. Benzyl aminopurine

47. Which of the following plant growth hormones increases the yield of sugar by increasing the length of stem in sugarcane?
A. Cytokinin
B. Auxin
C. Abscisic acid
D. Gibberellic acid

48. Which of the following is not an effect of ethylene?
A. Promotes senescence and abscission of plant organs
B. Breaks seed and bud dormancy
C. Hastens fruit ripening
D. Helps to overcome apical dominance

49. If a plant produces flowers when exposed only to alternative periods of 5 hours light and 3 hours dark, in a 24-hour cycle, then the plant should be a—
A. short-long day plant
B. short day plant
C. day neutral plant
D. long day plant

52. Length of grapes stalks increases due to–
A. Auxin
B. Cytokinins
C. gibbereIlins
D. ethylene

54. In flowering plants, the site of perception of light/dark duration is-—
A. Stem
B. Leaves
C. Shoot apex
D. Floral meristem

55. Senescence in plants leads into of cells-—
A. increase in size
B. increase in number
C. death
D. differentiation