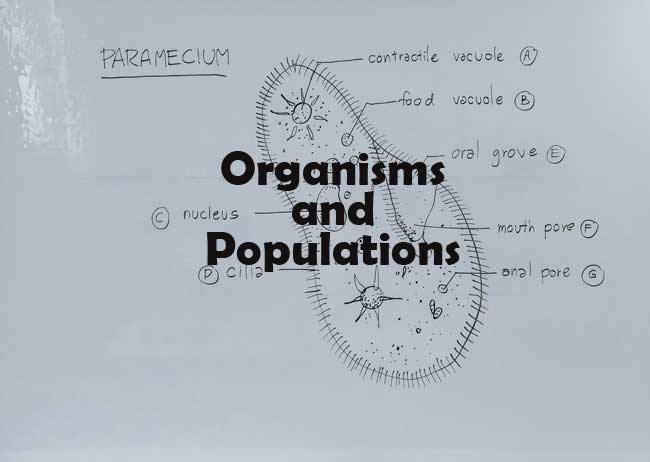 MCQ on Organisms and Populations

1. Presence of plants arranged into well defined vertical layers depending on their height can be seen in—
A. Tropical Savannah
B. Tropical Rain Forest
C. Grassland
D. Temperate Forest

3. The principle of competitive exclusion was stated by—
A. C. Darwin
B. Verhulst and Pearl
C. Mac Arthur
D. G F Gause

4. If ‘+’ sign is assigned to beneficial interaction ‘-‘ sign to detrimental and ‘0’ sign to neutral interaction, then the population interaction represented by ‘+’ ‘—’ refers to—
A. mutualism
B. amensalism
C. parasitism
D. commensalism

6. When does the growth rate of a population following the logistic model equal zero? The logistic model is given as dN/dt = rN(1 — N/K)
A. when N/K equals zero
B. when death rate is greater than birth rate
C. when N/K is exactly one
D. when N nears the carrying capacity of the habitat

7. The number of individuals of the same species that have come into the habitat from elsewhere during the time period under consideration is known as—
A. Emigration
B. mortality
C. natality
D. immigration

8. Many fresh water animals cannot live for long in sea water mainly because of the—
A. change in the atmosphere
B. change in the levels of thermal tolerance
C. variations in light intensity
D. osmotic problems they would face

9. The association that include herbivores and phytophagous insects is called-
A. competition
B. parasitism
C. predation
D. commensalism

10. In which type of interactions, both the interacting organisms do not live close together?
A. Mutualism
B. Predation
C. Parasitism
D. Competition

11. All the following interactions are mutualism, except—
A. Plant and animal relation for pollination
B. Association of algae and fungi in lichens
C. Association of cattle egret and grazing cattle
D. Association of fungi and roots of higher plants in mycorrhiza

12. Connel‘s field experiment on the rocky sea coast of Scotland, where larger Barnacle Balanus dominates the intertidal area and removes the smaller Barnacle cathamalus. This happened due to-
A. parasitism
B. predation
C. mutualism
D. competition

14. An association of individuals of different species living in the same habitat and having functional interactions is-
A. Ecosystem
B. Population
C. ecological niche
D. biotic community

15. In which of the following interactions both partners are adversely affected?
A. Competition
B. Mutualism
C. Parasitism
D. Predation

16. The organisms which can tolerate and thrive in a wide temperature range are known as—
A. Eurythermal
B. Isothermal
C. homoiothermal
D. stenothermal

17. The adaptations in an organism are meant for—
A. optimum primary production
B. optimum life span
C. optimum mobility
D. optimum survivaland reproduction

23. In which of the following parasitic castration is observed-
A. Carcinus maenus
B. African antelope
C. Anopheles
D. Culex

24. Abington tortoise in Galapagos islands became extinct after goats with great browsing efficiency were introduced. It is an example of —
A. Competitive release
B. Co-existence
C. Interference competition
D. Competitive exclusion

25. Which of the following associations shows mutualism?
A. fig and wasp
B. Barnacles on whale
C. Roundworms in human intestine
D. Orchids on mango tree

26. Just as a person moving from Delhi to Shimla to escape the heat for the duration of hot summer, thousands of migratory birds from Siberia and other extremely cold northern regions move to—
A. Western Ghat
B. Meghalaya
C. Corbett National Park
D. Keolado National Park

28. The removal of ‘keystone’ species will affect-
A. the producers
B. the consumers
C. the ecosystem
D. the decomposers

29. Which of the following statements regarding responses of organisms to abiotic factors is false?
A. All birds and mammals are capable of thermoregulation.
B. Majority of animals and nearly all plants cannot maintain a constant internal environment.
C. Shivering is a kind of exercise which produces heat and raises body temperature.
D. Very small animals are commonly found in polar regions as they have to spend less energy to generate body heat.

30. An orchid growing as an epiphyte on a mango tree is an example for—
A. parasitism
B. predation
C. commensallsm
D. mutualism

32. The interaction between the organism of one of the following pairs is an example for commensalism.
A. Cattle or sheep and grass
B. Wasps and fig tree
C. Orchid and mango tree
D. Cuckoo and crow

33. The success of mammals on earth is largely because—
A. they have the ability to maintain constant body temperature
B. they can conform to the changes in the environment
C. they can take care of their young ones as they have mammary glands to suckle them
D. they can reduce metabolic activity and go into a state of dormancy during unfavourable conditions in the environment.

34. Which one of the following refers to Allen’s rule?
A. An organism can move from a stressful habitat to a more hospitable area and return when the stressful period is over.
B. If the stressful conditions are localized or remain only for a short duration, an organism either migrates or suspends itself.
C. Low atmospheric pressure in higher altitudes results in altitude sickness.
D. Mammals from colder climates have shorter ears and limbs to minimize heat loss.

36. The number of individuals of the population who left the habitat and gone elsewhere during the time period under consideration is known as—
A. Natality
B. Mortality
C. Emigration
D. immigration

37. Which helps in maintaining species diversity in a community-
A. Omnivores
B. Predators
C. Herbivores
D. Facultative parasites

38. Identify the wrong pair of statements-
I. During plant succession some species colonise an area and populations become more numerous whereas populations of other species decline and even disappear.
II. Both hydrarch and xerarch successions lead to mesic conditions.
III. Secondary succession is a slow process as compared to primary succession
IV. In successive seral stages there is no change in the diversity of species of organisms.
A. I, III
B. I, II
C. III, IV
D. I, III

39. All successions whether taking place in water or on land proceed to a similar climax community which is-
A. Hydric
B. Xeric
C. Mesic
D. None of these

40. ln which of the following areas does the primary succession occur-
A. Abandoned farm land
B. Land which has been flooded
C. Forest destroyed by fire
D. Newly created pond

41. The first plants to appear in a badly burnt forest area will most probably be—
A. Mosses
B. Liverworts
C. Ferns
D. Grasses

42. A sedentary sea anemone gets attached to the shell lining of hermit crab. The association is—
A. commensalism
B. amensalism
C. ectoparasitism
D. symbiosis

44. Besides paddy fields, cyanobacteria are also found inside vegetative part of—
A. Equisetum
B. Psilotum
C. Pinus
D. Cycas

46. Benthic organisms are affected the most by—
A. light reaching the forest floor
B. surface turbulence of water
C. sediment characteristics of aquatic eco-systems
D. water-holding capacity of soil

48. Which one of the following is not a parasitic adaptation?
A. Development of adhesive organs
B. Loss of digestive organs
C. Loss of reproductive capacity
D. Loss of unnecessary sense organs

50. Cuscuta is an example of—
A. ectoparasitism
B. brood parasitism
C. predation
D. endoparasitism

51. Which one of the following microbes form symbiotic association with plants and helps them in their nutrition?
A. Azotobacter
B. Aspergillus
C. Gloumus
D. Trichoderma

52. Which one of the following is a population?
A. A spider and some trapped flies in its web.
B. Earthworm that lives in a grassland along with other arthropods.
C. All the plants in a forest
D. All the oak trees in a forest.

53. Some organisms are tolerant to a narrow range of salinity and are termed as—
A. euryhaline
B. stenohaline
C. neither (a) nor (b)
D. Saline

54. The animals that rely on the heat from environment than metabolism to raise their body temperature are, in strict sense, called-
A. ectothermic
B. poikilothermic
C. homeothermic
D. endothermic