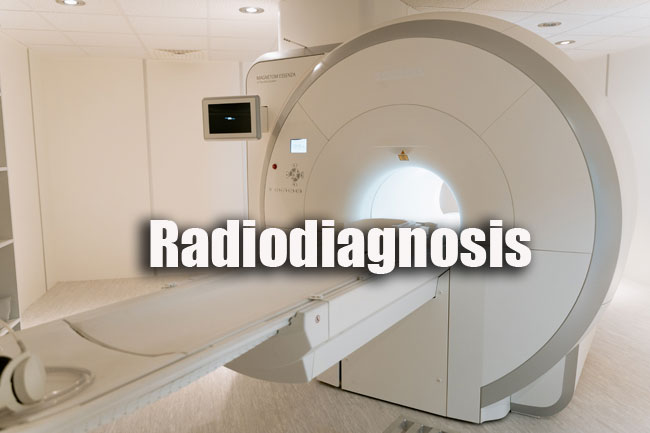 6. Which of the following X-ray tube detector movements is used in third generation CT ?
(1) Rotate-fixed
(2) Translate-rotate
(3) Rotate-rotate
(4) None of the above

9. Which of the following affects the noise level in CT ?
(1) Pixel Size
(2) Slice thickness
(3) Radiation Exposure
(4) All of the above

11. A 35-year-old man was involved in a RTA and sustained a comminuted open fracture of left femur. No other major injury is identified. After 48 hours he becomes acutely short of breath with widespread ill-defined peripheral infiltrates on a supine CXR. Which one of the following is the most likely diagnosis ?
(1) Cardiogenic pulmonary edema
(2) Fat emboli
(3) Hospital acquired pneumonia
(4) Pulmonary contusions

12. A 15-year-old boy is noted to have a solitary lytic lesion expanding the cortex of proximal humerus. An MRI demonstrates multiple fluid levels. What is the most likely diagnosis ?
(1) Aneurysmal bone cyst
(2) Enchondroma
(3) Giant cell tumor
(4) Simple bone cyst

13. A 6-year-old boy undergoes pelvic radiograph for complaints of limp. It reveals loss of height of right femoral head with fragmentation and sclerosis of epiphysis. What is the most likely diagnosis ?
(1) Developmental dysplasia of the hip
(2) Perthe’s disease
(3) Septic arthritis
(4) Slipped upper femoral epiphysis

17. A young boy has history of fall and sustains injury to the right knee with which extends from articular surface to the epiphyseal plate but not extending to metaphysis. What is Salter-Harris classification of this injury ?
(1) I
(2) II
(3) III
(4) IV

21. Which of following is specialized response assessment criteria for GIST after imatinib treatment ?
(1) WHO
(2) RECIST
(3) CHOI
(4) PERSIST

23. Which of the following is false regarding Infantile hepatic hemangioma ?
(1) Previously known as Infantile hemangioendothelioma
(2) Most common benign hepatic tumor in infants
(3) Contrast CT shows multiple peripheral and centripetal enhancing lesions with persistent delayed enhancement.
(4) Dilatation of aorta below the level of celiac artery

27. Which of the following is not a feature of Von Hippel Lindau syndrome
(1) Renal cell carcinoma
(2) CNS Hemangioblastomas
(3) Endolymphatic sac tumor
(4) Acoustic neuroma

32. Which of the following is not a HRCT feature of Idiopathic pulmonary fibrosis ?
(1) Honey combing
(2) Tractional bronchiectasis
(3) Peripheral and subpleural predominance
(4) Extensive ground glass opacity beyond the area of fibrosis

36. Which of the following interaction of X-ray photon with matter do not occur in diagnostic energy range and HAVE no role in diagnostic radiology ?
(1) Coherent scattering
(2) Photoelectric effect
(3) Compton scattering
(4) Pair production

38. A 10-year-old boy presented with fracture of the left proximal humerus. Plain radiographs show a pathological fracture and underlying lytic lesion in the metaphysis of the proximal humerus with a small bone fragment in the floor of the lesion. MRI features include intermediate signal on T1 and high signal on T2 with a fluid-fluid level. What is the most likely diagnosis of the underlying bony lesion ?
(1) Unicameral bone cyst
(2) Aneurysmal bone cyst
(3) Telangiectatic osteosarcoma
(4) Giant cell tumour

40. A 70-year-old man presents after falling down stairs and sustaining injury to the neck. An open-mouth view shows increased space between the dens and medial border of lateral masses of Cl. CT shows fracture of the anterior and posterior arch of the Cl vertebra. What is the most likely diagnosis ?
(1) Hangman’s fracture
(2) Clay shoveller’s fracture
(3) Jefferson fracture
(4) Extension teardrop fracture

41. A 35-year-old woman with mucocutaneous pigmentation on the hands and feet and in a circumoral distribution presents with cramping abdominal pain. She is found to have iron deficiency anaemia. Plain radiography of the abdomen suggested small bowel obstruction. Contrast-enhanced CT demonstrates jejunal intussusception. The most likely diagnosis is
(1) Familial adenomatous polyposis
(2) Peutz-Jeghers syndrome
(3) Leiomyoma small bowel
(4) Melanoma with bowel metastases

43. A true hermaphrodite can be distinguished from a pseudohermaphrodite by :
(1) chromosome complement
(2) presence of both testicular and ovarian tissue
(3) behaviour
(4) appearance of external genitalia

45. An 8-year-old boy presents with a history of recurrent chest infections. The chest radiograph shows a mass lesion in left lower zone. Contrast enhanced CT shows a 6 cm lobulated, multicystic lesion in the left lower lobe containing solid and cystic components. There is a feeding artery from the thoracic aorta into the lesion and draining via pulmonary vein. What is the most likely diagnosis ?
(1) Extralobar sequestration
(2) Intralobar sequestration
(3) Congenital cystic adenomatoid malformation
(4) Abscess