Narration is a speech quoted in the actual words or given in substance by the speaker or narrator. 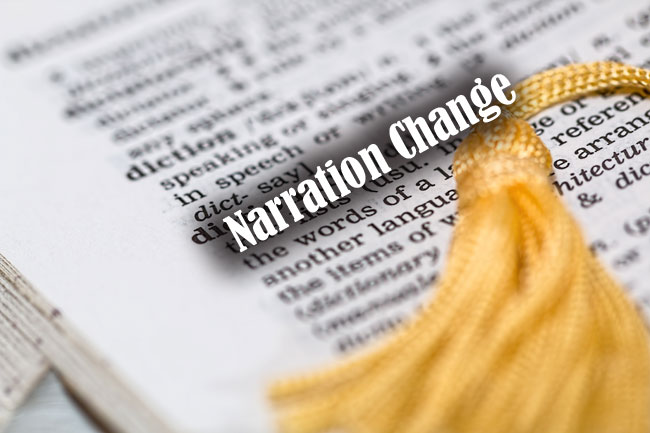 Narration is of two kinds

Note: The speech under the quotation marks or inverted commas (“………”) is Reported or Direct Speech and the verb introducing it is called Reporting Verb.

General Rules for change of Direct Narration into Indirect

1. A linker (that, if or whether) is generally used before the Indirect Speech.

Direct: He said, “Are you ill?”
Indirect: He asked if (or whether) I was ill.

N.B. Sometimes the linker that may also be omitted.

2. The pronouns are changed according to sense

Direct: He said to me, “I shall go to your house.”
Indirect: He told me that he would come to my house.

Direct: You said to Samar, “Have you done your job?”
Indirect: You asked Samar if he had done his job.

Direct: I said to them, “When are you coming?”
Indirect: I asked them when they were coming.

Direct: I said to Indira, “You sang so well.”
Indirect: I told Indira that she had sung so well.

3. If the Reporting Verb is in the present or future tense, the tense of the verb in the Reported Speech remains unchanged.

4. When the Reporting Verb is in the Past Tense, the Present Tense in the Reported Speech is changed into the corresponding Past Tense.

(a) A Simple Present becomes a Simple Past.

(c) A Present Perfect becomes a Past Perfect.

(f) In case of a universal or eternal truth, the tense of the Reported Speech remains unchanged

Note: Indirect statements are generally introduced by say or tell + object. Hence told me, told him’, etc. are written in place or ‘said to me’, ‘said to him’ etc.

Note: Some words relating to place and time are changed if the Reporting Verb is in the Past Tense.

Note: Change do not take place if the speaker narrates or reports the speech at the same place or during the same time.

Note: There is generally changes in the verb forms of the Modal Auxiliaries like must, should and ought to.

Change the Mode of Narration the following sentences :

6. He told me that he would come that day.

7. Ram said that he could not come as he was ill.

9. Mother said to me, “You must be careful while you cross the road.”

10. He told me that he would come the next day.

Rules for Changing the Direct Speech to the Indirect :

Questions beginning with Do or Be verbs

Note: Generally we can use either if and whether though if is more usual.

Note: Ask can be followed by the person addressed (indirect object)

Note: “Whether’ can emphasize that a choice has to be made.

3. She said to her brother, ‘Will you go to school today?”

4. Father said to me, “How have you performed in n the exam?”

9. The doctor said to the patient, “How are you today?”

Rules for Changing into the Indirect Speech :

Note: “Tell’ may be used in case there is doubt about the proper word to introduce the reported speech.

Note: Vocatives may be omitted or may be replaced by the expressions as given below.

Rules: Let’s or Let us in the Direct Speech expresses a suggestion or proposal and is reported by the verb suggest or propose followed by preposition to and should in the Indirect Speech.

Rule: When Let does not express a proposal or suggestion, it is changed into might or might be allowed or into some other form as per sense.

5. The teacher said to the students. “Don’t make a noise in the class and listen to my words.”

6. He said to the headmaster, “Kindly excuse me this time.”

7. She said to her friend, “Let us listen to the golden music of yester years.

8. He said, “Let the children do whatever they like.”

9. The examiner said to me, “Don’t repeat such silly mistakes.”

Wishes or prayers of Optative Sentences become statements in the Indirect Speech and the Reporting Verb is changed to wish or pray.

Change the following into the Indirect Speech:

5. The headmaster said, “May you all pass the exam.”

7. The spiritual leader said, “May peace prevail everywhere on earth.”

Exclamations usually become statements in Indirect Speech and the exclamation mark (!) disappears. The Reporting Verb is changed to the verbs like exclaim, cry out, pray, wish, applaud, etc.

3. They said, “Hurrah! India have beaten Pakistan in cricket.”

8. Ravi Shastri said, “What a great catch it is by Yuvraj Singh!”

9. The Greg Chappell said to the players, “Bravo! You have done pretty well.”

Reporting: When I asked him if he had worked out the sum, he replied (or answered) that he had not.

2. Dialogue : Arun: Would you lend me your pen?
Barun: No, I can’t lend you my pen. I shall be writing now.

Reporting: Arun asked Barun if he would lend him his pen. Barun in reply refused to lend his pen because he would be writing then.

3. Dialogue : Davy: You have a trade, at present, Mr. Faraday?
Faraday Yes, Sir, I am a book-binder.
Davy: And you desire to change?
Faraday: Yes, Sir, I am anxious to do so.
Davy: Why?

Reporting: Davy asked Faraday if Faraday had a trade at that time. Faraday replied that he was a book-binder. Then Davy asked him if he desired to change his trade. Faraday told him politely that he was anxious to do so. Davy wanted to know the reason.

4. Dialogue : Father How do you feel, Schatz?
Schatz Just the same, so far.
Father: Why don’t you to sleep? I’ll wake you up for the medicine.

Reporting: Schatz’s father asked him how he felt. Schatz replied that he felt the same till that time. His father then asked him why he did not try to sleep. He also added that he would wake him up for medicine.

6. Dialogue : Gandhi: You don’t like vegetables?
Fischer: I don’t like the taste of these vegetables three days running.
Gandhi: Ah, you must add plenty of salt and lemon.
Fischer: You want me kill the taste?
Gandhi: (laughing) No, enrich the taste.

2. Can you cure a headache?
Chemist (Thrusting a bottle under the man’s hose) : I am sure your headache is gone.
Man: You fool. It is my wife that has got the headache, not me.

3. “I am waited for in Egypt”, said the swallow. “My friends are flying up and down the Nile, and talking to the large lotus-flowers. Soon they will go to sleep in the tomb of the great king.
“Swallow. Swallow, little Swallow,” said the Prince. “Will you not stay with me for one night. and be my messenger? The boy is so thirsty, and the mother so sad.”

4. “But where is your little companion ()?” he said, “the boy I put into the tree.” “We don’t know”, answered the children. “he has gone away.”
“You must tell him to be sure and come tomorrow,” said the Giant.