Many candidates look through the provided ITI Electrical Questions and Answers Paper to understand the Exam Pattern over the years. For those candidates, we suggest preparing well to get better scores in the ITI Electrical Exam. 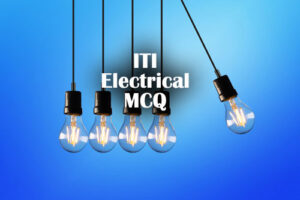 All interested and Eligible Candidates can download these electrical question papers which are provided below. The ITI Electrical Model Papers are available in pdf to download easily. Have you applied for ITI Electrical Recruitment and searched for Previous Papers?

Check the latest solved papers of Electrical. These Electrical Previous Year Exam Papers will help the aspirants to crack the exam easily. The candidates who are preparing for the ITI Electrical exam can also get the Exam Pattern along with Previous Exam Papers with Solutions.

So, refer to these Electrical Old Question Papers and also improvise yourself in answering the questions randomly. Download the Electrical Exam Solved Papers, Asked Questions & answers from the subject wise enclosed links.

5. The number of complete cycles produced in one second is called :
(A) frequency
(B) period
(C) amplitude
(D) peak value

6. The function of tweezer is to :
(A) grip and hold the cylindrical objects
(B) cut small diameter wires and cables
(C) hold light weight and very small components and wires
(D) remove the sheath and insulation from cables and boards

9. Specific gravity of electrolyte is measured by :
(A) lactometer
(B) pyrometer
(C) hydrometer
(D) galvanometer

13. Which is the example of mandatory sign?
(A) Risk of electric shock
(B) Wear safety belt
(C) Smoking prohibited
(D) All of the above

16. Which tool is used to measure the size of the conductor?
(A) Bevel gauge
(B) Vernier caliper
(C) Standard wire gauge
(D) Depth gauge

17. In which classification of accessories, the switch will belong?
(A) Holding
(B) Safety
(C) General
(D) Controlling

18. What is the name of defect occurred in a cell, due to the presence of impurities on the zinc plate?
(A) Polarisation
(B) Sulphation
(C) Buckling
(D) Local action

22. Which substance is diamagnetic?
(A) Manganese
(B) Bismuth
(C) Nickel
(D) Cobalt

28. The table fan is not oscillating. The cause may be :
(A) the loose guards
(B) the defective speed control switch
(C) the spur gear with broken teeth
(D) the blades are out of balance

29. Which one has negative temperature co-efficient of resistance?
(A) Copper
(B) Nichrome
(C) Aluminium
(D) Mica

30. Which type of resistors are called as thermistors?
(A) PTC resistors
(B) Varistors
(C) LDR
(D) NTC resistors

31. Which one is NOT an application of electromagnet?
(A) Calling bell
(B) Protective relays
(C) Electric iron
(D) DOL starter

36. A fluorescent tube may burn out if the choke coil is :
(A) open circuited
(B) grounded
(C) short circuited
(D) connected to the neutral line

38. While testing a capacitor with a multimeter, the needle shows zero position indicating the capacitor is :
(A) in good condition
(B) open circuited
(C) short circuited
(D) leaky

42. The other name of field current in an alternator is :
(A) load current
(B) armature current
(C) exciting current
(D) induced current

44. The voltage induced in the armature of an alternator will be :
(A) pulsating DC
(B) oscillating
(C) DC
(D) AC

48. Transformer oil is used to :
(A) Cool
(B) Lubricate
(C) lubricate and cool
(D) insulate and cool

50. Power transformers are designed to have maximum efficiency at :
(A) near full load
(B) no load
(C) half load
(D) more than full load

57. The speed of a DC motor can be controlled by varying :
(A) the resistance of the armature circuit
(B) its flux per pole
(C) the voltage
(D) all of the above

60. The power output of any electrical motor is taken from the :
(A) Shaft
(B) terminal box
(C) armature
(D) brushes

69. The repeated closure of the circuit to start a motor from rest, producing small movements is called :
(A) starting
(B) jolting
(C) jogging
(D) flashing

71. The edges of the slot liner should be folded on either end to prevent them from sliding in the slots is called :
(A) Cuffing
(B) Wedging
(C) Packing
(D) over hanging

72. The periphery of the armature divided by the number of poles of the machine is called :
(A) front pitch
(B) pole pitch
(C) back pitch
(D) commutator pitch

73. An electromagnetic device used to detect and locate grounded, shorted and open coils in an armature:
(A) external growler
(B) internal growler
(C) megger
(D) mulimeter