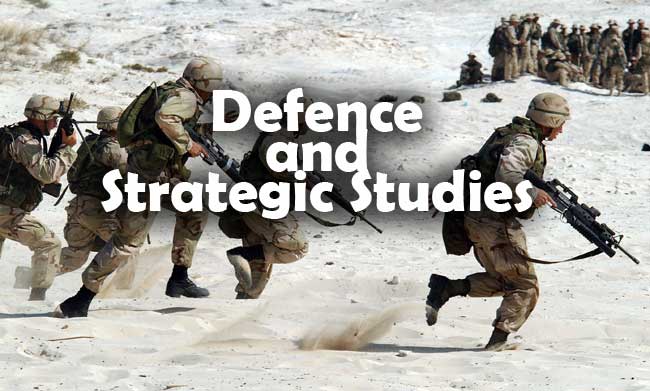 MCQs on Defence and Strategic Studies

4. According to Alfred T. Mahan what is/are the element of Sea power ?
(A) Physical configuration
(B) Geographical position
(C) Extent of territory
(D) All of the above

5. Who was a key proponent of ‘strategic bombing in aerial warfare’ ?
(A) Giulio Douhet
(B) L. B. H. Liddell Hart
(C) Mao Zedong
(D) None of the above

6. The book on Thermo-Nuclear War was written by :
(A) Herman Kahn
(B) Robert Kaplan
(C) Henry Kissinger
(D) Lawrence Freedman

8. Who was the first scholar use the word ‘Superpower’ as it is currently used ?
(A) George Perkovich
(B) Nicholas Spyman
(C) Kenneth Waltz
(D) John Mearshimer

9. Which one of the following is the origin of strategic studies ?
(A) Thucydides writings on the Peloponnesian war
(B) Edward Meade Earle’s Seminar on grand strategy and conduct of war
(C) E. H. Carr’s ‘Twenty Years Crisis’ that presents a critique of Liberalism
(D) Hans Morgenthau’s work on ‘Politics Among Nations : The Struggle for Power and Peace’

10. Name the American diplomat who wrote the ‘long telegram’ which formed the basis of American policy of ‘containment’ towards the Soviet Union during the Cold War :
(A) Medeleine Albright
(B) George Keenan
(C) Ralph Bunch
(D) Dean Rush

11. Who is the author of Man, the State, and War ?
(A) Stephen Krasner
(B) Kenneth Waltz
(C) Robert Keohane
(D) John Mearshimer

13. Who is an important Air-Warfare theorist among the following ?
(A) B. H. Liddle Hart
(B) Alfred Thayer Mahan
(C) Billy Mitchell
(D) Carl Von Clausewitz

14. Which famous person made the following statement : ‘‘The seed of war in the world is industrial and commercial rivalry’’.
(A) Mahatma Gandhi
(B) Martin Luther King
(C) Nelson Mandela
(D) Woodrow Wilson

17. Who among the following argued that ‘‘Terrorism is not like a disaster before which we are helpless ?
(A) Baraq Obama
(B) George P. Shultz
(C) Bill Clinton
(D) George W. Bush

20. The ‘‘Atoms for Peace’’ speech was made by which American President in the United Nations General Assembly ?
(A) Woodrow Wilson
(B) Franklin D. Roosevelt
(C) John F. Kennedy
(D) Dwight Eisenhower

21. Which one of the following International Organisation was established to verify the obligations of the members of the Nuclear Non-Proliferation Treaty (NPT) ?
(A) Organisation for the Prohibition of Chemical Weapons
(B) Implementation Support Unit
(C) International Atomic Energy Agency
(D) International Monitoring Stations

29. Which one of the following North-East States of India is surrounded by Bangladesh from three sides ?
(A) Assam
(B) Tripura
(C) Meghalaya
(D) Arunachal Pradesh

30. ‘‘One for all, all for one’’ is a concept related to :
(A) Military Alliance
(B) Collective Security
(C) Deterrence
(D) Detente

33. Who among the following propounded ‘National Character’ as one of the elements of Sea Power ?
(A) Carl Von Clausewitz
(B) W. Mitchell
(C) Jomini
(D) Alfred T. Mahan

34. Which International treaty gave rise to the idea of Sovereign nationstates?
(A) Treaty of Westphalia
(B) Treaty of Versailles
(C) Concert of Europe
(D) Treaty of Rome

35. ‘‘States are motivated by morality and values.’’ This statement is related to :
(A) Liberalism
(B) Constructivism
(C) Realism
(D) Idealism

36. ‘Security dilemma’ refers to which one of the following ?
(A) A structural nation in which states attempt to look after their security regardless of other states intentions which leads to rise in insecurity
(B) Offensive posture of any nationstate
(C) It is a dilemma a state faces when constructing national security plans
(D) Where states help in spreading instability and conflict between other states

40. The Strait which connects Mediterranean Sea to the Atlantic Ocean is :
(A) Gibraltar Strait
(B) Bering Strait
(C) Bosphorous Strait
(D) Bab-el-Mandab

42. Samuel Huntington’s Clash of Civilizations’’ argued that the principal patterns of conflict and cooperation in the world were shaped by :
(A) Nation States
(B) Political Leadership
(C) Nationalism
(D) Culture

45. Who is an important Air Warfare Theorist among the following ?
(A) B. H. Liddell Hart
(B) Alfred Thayer Mahan
(C) Billy Mitchell
(D) Carl Von Clausewitz

46. Which famous person made the following statement. ‘‘The seed of war in the Modern World is industrial and commercial rivalry :
(A) Mahatma Gandhi
(B) Martin Luther King
(C) Nelson Mandela
(D) Woodrow Wilson

47. What is the purpose of neutron scanning ?
(A) To detect cancer cells in the body
(B) To detect contraband items in containers
(C) To detect submarines
(D) For scanning documents

50. Which one of the following is not an international organisation as per the definition given by Inis Claude ?
(A) United Nations
(B) G-8
(C) SAARC
(D) NATO