Last 5 years Chinese History Questions and Answers Papers provided here. Candidates who are applied for the competitive exam can check and download the Chinese History Trivia MCQ from here. We have updated history of Chinese topics GK Papers to present you a scheme on how to plan for the exam. 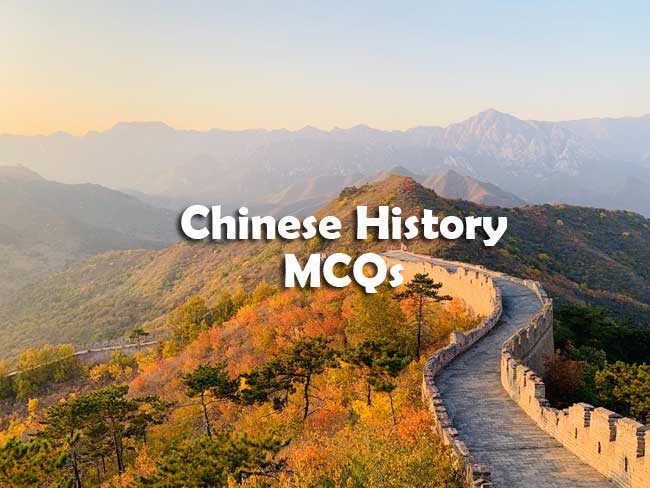 Questions and Answers on Chinese History

1. Which among the following is not Ming loyalist movement?
(A) The Heaven and Earth Society
(B) The White Lotus Sect
(C) Triad Society
(D) The Boxers

5. The Manchus were the nomadic tribes living in present day
(A) Manchuria
(B) Korea
(C) Mongolia
(D) None of the above.

6. The greatest literary contribution of emperor Ch’ien-lung was the compilation of
(A) A record of ten perfect accomplishment
(B) A discourse on parties and cliques
(C) The complete library of the four treasuries
(D) None of the above

7. The most important organ in the Ch’ing administration after 1729 was
(A) The Six Boards
(B) Civil Office
(C) The Grand Council
(D) Bannermen

8. The major function performed by the gentry in the local community was
(A) compiling and updating genealogies
(B) aiding clan members
(C) educating young clan members
(D) The settlement out of court of civil disputes

9. Who were the most important single group in Chinese society?
(A) Government officials
(B) Gentry
(C) Artisans
(D) Merchants.

10. On the first day of the provincial examination, the candidates had to write three essays on subjects chosen from:
(A) Confucian Four Books
(B) Five Classic
(C) Historical subjects
(D) Current problems.

11. No one was allowed to be appointed to a high position in his native province by the:
(A) Law of Inheritance
(B) Law of appointment
(C) Law of avoidance
(D) None of the above

12. At the bottom of the provincial administration was:
(A) Province
(B) District
(C) Prefect
(D) Circuit

15. A recent view appraises the Chinese society as an archetype of:
(A) Feudal system
(B) Oriental despotism
(C) A gentry-based elite
(D) Bureaucratic system

16. Which province was allotted the highest quota in the district examination?
(A) Chihli
(B) Szechuan
(C) Kansu
(D) Kiaotung

18. The Chinese emperor made offering to heaven, in times of
(A) Natural calamities
(B) War
(C) Victory
(D) None of the above

19. The nobility of the Ch’ing system consisted of :
(A) Dalai Lama, The Chief Taoist. The Duke King
(B) Two categories such as the six board and nine minister
(C) Three categories such as imperial clansmen, titular nobles and bannermen
(D) Officials and Gentry.

20. The clansmen numbering about 700 from the late 16th century through the end of the 19th century were the direct descendants of:
(A) Duke K’ung
(B) Nurhaci
(C) Dalai Lama
(D) Karmapa

21. After the first Ming emperor abolished the office of the prime minister in 1380, the most important organ in the central government till 1729 was:
(A) The Grand Secretariat
(B) The Grand Council
(C) Civil Office
(D) Governors.

23. The land measurement registers showed the total land area in each locality, this register was called:
(A) Yellow registers
(B) Fish-scale registers
(C) Bannermen
(D) None of the above

28. The gentry played a dominant role in Chinese society and enjoy many unique privileges, they were:
(A) Scholars who had passed the governmental examinations
(B) Clansmen, direct male descendants of Nurhaci
(C) Duke K’ang, direct descendants of Confucious.
(D) Bannermen.

30. Government examination was conducted on the district, provincial and metropolitan levels. In order to qualify for the first of these, the preliminary district examination, the candidate had to present a guarantee of his origin and character from a member of the gentry. The first session of exam was conducted by:
(A) District Magistrate
(B) Grand Secretariat
(C) Grand Council
(D) Prefecture.

34. The Opium wars were fought between which of the following countries?
(A) China and Japan
(B) China and Russia
(C) China and Britain
(D) China and United Nations

35. The immediate cause of outbreak of first opium war was:
(A) Repressive Policy of Lin
(B) Desire of equality
(C) Imperialists policy of Britain
(D) None of these

36. Which treaty was concluded after the end of first opium war?
(A) Treaty of Tiensin
(B) Treaty of Paris
(C) Treaty of Peking
(D) Treaty of Nanking

37. What is the consequence of second opium war?
(A) Economic condition of China improved
(B) The door of China was opened for the western countries
(C) Both (A) and (B)
(D) None of these

41. The British felt much of the abuse at Canton was unknown to:
(A) Beijing
(B) Amoy
(C) Peking
(D) Hong Kong

42. Who monopolized the Canton trade?
(A) Czar
(B) Commissioner
(C) The Ch’ing court
(D) The guild

43. Who were the first westerners to reach China?
(A) France
(B) Portuguese
(C) British
(D) Italy

44. By the late 18th century, there was a flourishing triangular trade between:
(A) India, USA, Britain
(B) Britain, Canada, Canton
(C) Canton, India and Britain
(D) China, Canton, India

45. The shift of Business to______naturally reduced the calls of English ships at Canton:
(A) Peking
(B) Sanghai
(C) Yun-t’ai-shan
(D) Ningpo