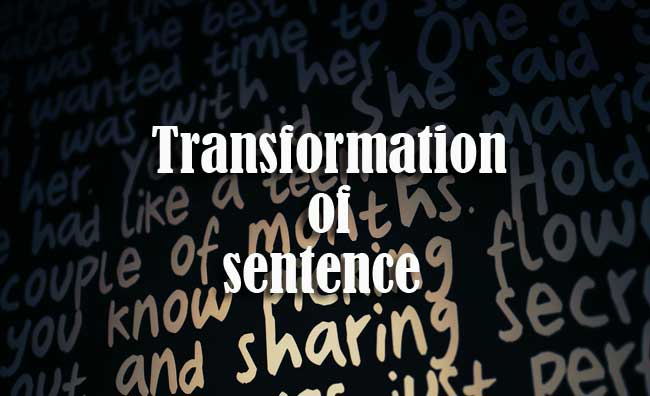 Worksheet on Sentence Transformation for Class 11

1. Sidda was hanging about the gate. (Make it Negative)

2. Shall I compare thee to a summer’s day? (Make it an assertive sentence/Statement)

3. While she ate, the coolie sat opposite her on his haunches. (Use ‘No sooner …. than’)

6. He is in the waiting room. (Make it Complex)

7. It takes much time to kill a tree. (Turn into negative)

8. It is only magicians who know that. (Turn into negative)

9. Not so much pain will do it. (Change into Affirmative)

10. Though he has got a prize he is not satisfied. (Simple)

11. He is a man of knowledge. (Use the adjective form of ‘knowledge’)

12. They walked unsteadily. (Make it Negative)

14. Seeing good paintings and sculpture, whether or not they understand them fully, will train their eyes, strengthen their powers of discernment and gradually awaken the aesthetic sensibilities. (Begin with: ‘Whatever they understand from the vision’)

15. I believe that we are not real social workers. (Rewrite the sentence using the noun form of ‘believe’)

16. I wish that youth was eternal. (Exclamatory)

17. He has neither a sister nor a brother. (Simple)

18. Our country’s economic decline has followed closely the decay of its functional arts. (Begin with: ‘But for…..’)

19. As soon as he came in her life – immediately she went in haste to give that news. (Make it Complex)

20. She is cleverer than her sister. (Negative)

21. He had an ideal helpmate in my mother Ashiamma. (Turn into a Complex sentence)

22. She led him down the hall to the front door. (Turn into an Interrogative sentence)

23. He had served nearly ten months of a four year sentence. (Make it Negative)

25. I am not so attractive as your recently left companion. (Change the degree)

26. It would be a fascinating game, guessing what went on out there. (Turn the Participle into an Infinitive)

29. After cleaning the shelf she put the book on it. (Compound)

30. It was really a linnet singing outside the window. (Make it Complex sentence)

31. Few girls can resist flattery. (Use the Noun form of ‘resist’).

33. One of them was in a most terrible condition. (Change the degree of Comparison)

34. She knew two or three letters of the alphabet and could draw a kind of cat and crow. (Make it Simple & Compound)

35. Aren’t you ashamed of yourself? (Turn into an Assertive sentence)

36. I had the most extraordinary experience with a Hindu family. (Change the degree of Comparison)

37. But the provision that our universities make for this is sorely inadequate at present. (Make it Compound)

38. The humming insects don’t disturb his rest. (Change into a complex sentence)

39. The clerk was impressed. (Use the adjective form of ‘impressed”)

40. She was silent. (Rewrite using the Noun form of ‘silent’)

44. One mistake more and the coach will turn you out from the team. (Complex)

45. Iron is an useful metal. (Interrogative)

48. The Tsar washed it as best he could. (Change into Comparative degree)

49. Sidda was given two meals a day and four rupees a month. (Make it Negative)

50. He allowed her to peep through a little gap. (Make it Negative)

1. It was not that Sidda was not hanging about the gate.

2. I wonder whether I should compare thee to a summer’s day or not.

3. No sooner did she eat than the coolie sat opposite her on his haunches.

4. No sooner did I spot the book on the shelf than I bought it.

5. She does not dance badly.

6. He is in the room which is meant for waiting.

7. It does not take little time to kill a tree.

8. None but the magicians know that.

9. So much pain is insufficient to do it.

10. He has got a prize but he is not satisfied.

11. He is a knowledgeable man.

12. They did not walk steadily.

13. He is a person who suffers from forgetfulness.

14. Whatever they understand from the vision of paintings and sculpture will train their eyes, strengthen their powers of discernment, and gradually awaken the aesthetic sensibilities.

15. It is my belief that we are not real social workers.

17. He does not have a sister or brother.

18. But for the decay of our country’s functional arts the economic decline has followed it closely.

19. The moment when he came in her life she went in haste to give that news.

20. She is no less cleverer than her sister.

21. He had an ideal helpmate in my mother, whose name was Ashiamma.

22. Did she not lead him down the hall to the front door?

23. He had served not more than ten months of a four year sentence.

25. Your recently left companion is more attractive than me.

26. It would be a fascinating game to guess what went on out there.

29. She cleaned the shelf and put the book on it.

30. It was really a linnet who was singing outside the window.

33. One of them was in a more terrible condition than others. (Comparative) / None of the others were in as terrible a condition as that one person. (Positive)

35. You should be ashamed of yourself.

37. Our universities make provision for this but it is sorely inadequate at present.

38. The insects which are humming don’t disturb his rest.

39. It was impressive to the clerk.

41. Jimmy’s habits were not unknown to Ben Price.

42. In spite of being needy he never begs.

44. If you do one more mistake the coach will turn you out from the team.

48. The Tsar washed it better than he ever could.

49. Sidda was not given more than two meals a day and four rupees a month.