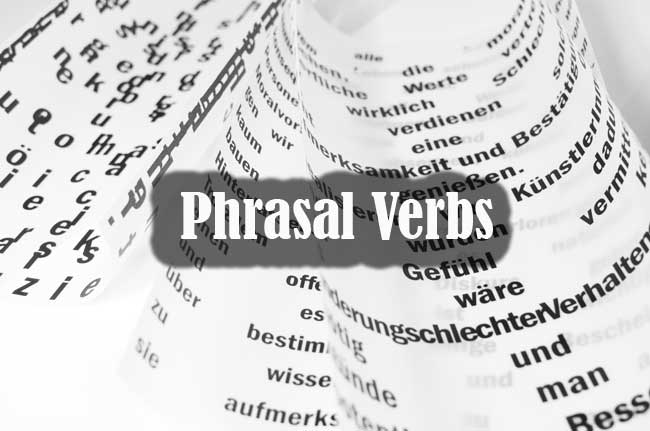 Choose the correct phrasal verb from the list given below to replace the words underlined and change their form where necessary. There could be an extra phrasal verb:

1 (i) I cannot understand what he says.
(ii) I met my friend in the park.
(iii) She failed to appear in time.
(iv) The strike was withdrawn at last.
List: take after, call off, make out, turn up, come across.

2 (i) The girl resembles her mother.
(ii) Evening starts early in winter.
(iii) Our school closes at 4:30 pm.
(iv) The school magazine will be published soon.
List: keep on, bear with, take after, pass away, put away.

3. (i) How could you tolerate such rude words?
(ii) The girls continued practising the song.
(iii) The boy resembles his father.
(iv) The great leader died last week.
List: look after, set in, bring out, take after, break up.

4 (i) The patient will recover soon.
(ii) The police chased the robbers.
(iii) One cannot change an old habit easily.
(iv) The burglars forcibly entered the house.
List: run after, break into, give up, get over, come round

5. (i) The army finally surrendered.
(ii) The man rejected our proposal.
(iii) You will soon overcome your problems.
(iv) No one can tolerate such bad manners.
List: stand against, get over, turn down, give in, put up with

6. (i) The soldiers surrendered at last.
(ii) The son resembles his father.
(iii) Two friends quarrelled for nothing.
(iv) The strike was withdrawn.
List: take after, break out, fall out, give in, call off

7. (i) A fire erupted in the market last night.
(ii) The Board has published two workbooks in English.
(iii) The son resembles his father in many ways.
(iv) No one can tolerate such misbehaviour.
List: take after, bear with, break out, bring out, put up

8. (i) The evening starts early in winter.
(ii) Some guests are yet to arrive.
(iii) The Mayor distributed the prize at the school sports day.
(iv) The poet remembers the past.
List: give away, call up, set in, turn up

9. (i) By chance she found some old photographs in the drawer.
(ii) The dog was chasing a rabbit.
(iii) The company has established several new branches.
(iv) He removed his hat before he entered the hall.
List: bring out, come across, take off, set up, run after

10) (i) I could not understand what he said.
(ii) His plans failed for want of funds.
(iii) I do not know why the principal rejected our proposal.
(iv) The child was reared by his aunt.
List: knock down, bring up, turn down, make out, fall through

11 (i) The death penalty has been abolished in many European countries.
(ii) The patient has recovered after prolonged illness.
(iii) The villagers were chasing the herd of elephants.
(iv) The girl resembles her mother.
List: run after, do away with, take after, come round

12. (i) He is in search of a job.
(ii) Two friends quarrelled for nothing.
(iii) Over-exercise causes harm to his health.
(iv) Mr. Mukherjee has started a new business.
List fall out, tell upon, look for, set up, call in

13 (i) I shall see you at your school.
(ii) The teacher is examining the answer script.
(iii) The old man died last night.
(iv) We were late at school as the rain came.
List: look into, pass away, set in, call on, look after

14 (i) I cannot tolerate this insult.
(ii) He will be cured soon.
(iii) You must obey my order.
(iv) He had to postpone his journey.
(v) I cannot understand what is written here.
(vi) The students continued talking when there was no teacher in the class.
List: make out, carry out, keep on, come round, put off, bring up, put up with

15. (1) He had two teeth extracted yesterday.
(ii) The cricket match has been postponed till next Monday.
(iii) A very important point has been omitted from the paragraph.
(iv) He escaped from home when he was six.
(v) She could not understand what the teacher was saying.
List: run away, put off, make out, take out, leave out

16. How do you begin revising for the examination? You should first prepare a list of reading and writing tasks that you must do. You must also examine carefully all the tasks in your text books and solve them. The Board has published two books of ‘Sample Questions’. Examine them carefully.
List: bring out, make out, set about, look through, work out, go over

17. Just as Anil was about to depart from Bombay, the rains commenced. He had to postpone his journey and although he was perturbed by the delay, he realised he had to accept it.
List: put off, put out, set in, put up with, set off, set down

Choose the correct phrasal verb from the list given below to replace the underlined words:

1. (i) These are matters that affect the welfare of the community.
(ii) He’s resisting pressure well under the strain of losing his job.
(iii) She’s under a lot of strain, just be patient with her.
(iv) The scandal will soon be forgotten.
(v) He apologized for being furious at them.
List: blowing up, bearing up, bear with, blown over, bear on.

2. (i) The prisoner escaped from the guards.
(ii) Her health deteriorated under the pressure of work.
(iii) Burglars had got into a room while the people of the house were away.
(iv) She longed to interrupt their conversation.
(v) Fire appeared suddenly at night.
List: List: broken in, broke away, break in, broke out, broke down.

3 (i) The conference came to an end at 10 pm.
(ii) Scientists are beginning to overcome obstacles in the fight against the disease.
(iii) He revised the idea in his mind.
(iv) It was a difficult time, but we never stopped believing.
(v) They respect him.
List: went over, broke up, break through, look up to, gave up.

4 (i) He has a low opinion of his humble neighbour.
(ii) Things did not produce as expected.
(iii) She made the situation successful.
(iv) He was raised by his uncle.
(v) She was waiting for (to) the visit.
List: tum out, looks down upon, looking forward, brought up, turn round.

5. (i) It is time to start working seriously.
(ii) I ran into an old mate on Sunday.
(iii) I was busy with work in the morning.
(iv) I will meet you soon.
(v) Let us make a plan.
List: catch up with, chalk out, caught up, buckle down, bumped into.

6. (i) Please clear the mess afterwards.
(ii) The weather forecast said that it would brighten up later in the day.
(iii) Leave my house right now.
(iv) My dad is the best person I’ve ever met.
(v) You can come to my house anytime.
List: clear off, drop in, clear up, clean up, come across.

7. (i) Could you chop the onions for me?
(ii) You can rely on me at the hour of need.
(ii) He entered without permission while the meeting was going on.
(iv) We stayed at a hotel called The Nest.
(v) Read thoroughly before signing the contract paper.
List: barged in, put up, read over, cut up, bank on.

8. (i) She did not work according to her family reputation.
(ii) Don’t worry, your dad will recover soon.
(iii) The strike was cancelled by the workers’ union.
(iv) Did you get my pink clip?
(v) Extinguish the fire.
List: come by, put out, act up, called off, come round.

9 (i) The bus knocked down a cat.
(ii) The Secretary distributed the prizes on 15 August.
(iii) Avoid having junk food on a regular basis.
(iv) Do not hate the slum-dwellers. Dos (0)
(v) Remove your boots.
List: gave away, ran over, take off, look down upon, keep away from.

10. (i) They tried to conceal the truth.
(ii) The flight was delayed for two hours.
(iii) I offered a helping hand to the disabled boy.
(iv) Check your tongue while talking to elders.
(v) Wait till I finish talking.
List: held up, hold on, hold in, held out, hold back.

11. (i) Wear the jacket as it is cold outside.
(ii) The siblings quarrelled over their ancestral palace.
(iii) When do you rise from bed in the morning?
(iv) I refrained from showing my emotions.
(v) I cannot comprehend what you are saying.
List: held back, get up, put on, make out, fell out.

12. (i) They started late in the afternoon.
(ii) She started for Melbourne.
(iii) The enemy camp attacked the soldiers at midnight.
(iv) He established a clinic in South Kolkata:
(v) The mason began his work very early today.
List: set up, set forth, set upon, set about, set out.

13 (i) I visited his bungalow yesterday.
(ii) The workers demanded an increment.
(iii) She has all the desired qualities to be a teacher.
(iv) Mind your own business.
(v) Stick to your principle, come what may.
List: (is) cut out, hold by, called for, look to, called at.

14. (i) Write what I’m dictating.
(ii) The boy is addicted to action movies.
(iii) I donated a portion of my earning to an old age home.
(iv) Deliver the parcel to her.
(v) The show has come to an end smoothly.
List: pass on, taken to, passed off, set apart, take down.

15. (i) The gang of robbers entered the bank by force at midnight.
(ii) The teacher demanded an explanation from the student.
(iii) Extinguish the candle.
(iv) Our college closes at 12 p.m.
(v) Do not lament over spilt milk.
List: blow out, broke into, cry over, asked for, breaks up.

16 (i) Please stop this foolish conversation.
(ii) He (is) born to an elite family.
(iii) The price of onion has decreased from last week.
(iv) The prisoner escaped safely.
(v) You are assigned to detect his faults.
List: got off, comes of, find out, cut out, come down.

17 (i) Divide the pizza equally.
(ii) This novel discusses many problems of women.
(iii) Go out of the room.
(iv) The police followed the criminal and caught him.
(v) Please keep away your cat.
List: deals with, hold off, went after, deal out, get out.

Fill in the blanks with the correct phrasal verbs given below

List: came across, fill up, look down upon, add up to, handed down, hanging up, looking forward to, burst into, hand in, hang out, checked out, grown up, cut in, hand over, sort out, think over, called out, stick to, turn on, run over, try on, let down, take off, worked out, looking for.