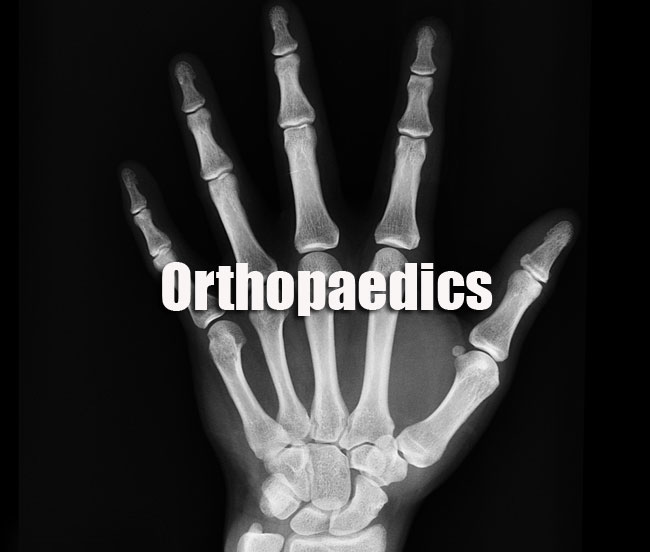 1. A patient has a swollen, tendon hindfoot with focal tenderness beneath the heel after falling 12 feet. Radiographs and CT scans are negative. An MRI scan would most likely reveal. which of the following conditions?
(1) Occult subcortical fracture of the calcaneus
(2) Acute osteonecrosis
(3) Rupture of the posterior tibial tendon
(4) Rupture of the plantar fascia

2. A 22-month-old girl has cerebral palsy. Which of the following findings is a good prognostic indicator of the child’s ability to walk in the future?
(1) Asymmetric tonic neck reflex
(2) Moro reflex
(3) Extensor thrust
(4) Positive parachute reaction

5. A genetic abnormality in the cyclic AMP signalling pathway is involved in which of the following conditions?
(1) Achondroplasia
(2) Hypochondroplasia
(3) Multiple hereditary exostosis
(4) Fibrous dysplasia

6. Dwarfism caused by a defect of Fibroblast Growth Factor Receptor — 3 (FGFR3) is associated with all of the following traits, EXCEPT –
(1) Rhizomelic limb shortening
(2) Normal intelligence
(3) Frontal bossing
(4) Cervical spine instability

7. Which of the following conditions is inherited in an X — linked dominant fusion?
(1) Hemophilia A
(2) Marfan syndrome
(3) Familial hypophosphatemic rickets
(4) Sickle cell anemia

8. All of the following are described procedures for CTEV, EXCEPT –
(1) Dwyer Osteotomy
(2) Akron Dome Osteotomy
(3) Lichtblau Procedure
(4) Dillwyn — Evans Procedure

12. A 13-year-old boy has a left slipped capital femoral epiphysis which has displaced 75%. He is unable to bear weight on the limb, other hip is normal. Your preferred treatment is as follows –
(1) Hip spica cast
(2) Gentle reduction of the slip and fixation with cannulated screw
(3) Free vascularized fibular grafting
(4) Subtrochanteric osteotomy

13. Which of the following is associated with a mutation in the GNAS gene?
(1) Fibrosarcoma
(2) Chondroblastoma
(3) Fibrous dysplasia
(4) Osteoblastoma

14. Which of the following is not a typical deformity/gait disturbance seen in cerebral palsy?
(1) Toe walking
(2) Wide-based gait
(3) Hip adduction
(4) Forearm supination

16. Features of Klippel — Feil Syndrome include all, EXCEPT –
(1) Fusion of 2 or more cervical vertebrae
(2) Low hairline at the back of head
(3) Short Neck
(4) Webbed Fingers

17. Most common site of Actinomycosis amongst the following is –
(1) Cervicofacial
(2) Foot
(3) Rib
(4) Tibial metaphysis

19. All are associated with chronic osteomyelitis, EXCEPT –
(1) Sequestrum
(2) Amyloidosis
(3) Myositis ossificans
(4) Metastatic abscesses

23. Which of the following is not a component of Kocher’s criteria when diagnosing septic arthritis of the hip?
(1) Non-weight-bearing on the affected side
(2) Erythrocyte Sedimentation Rate (ESR) greater than 40 mm/hr
(3) Fever
(4) White Blood Cell (WBC) count of > 12000 mm3

24. Which of the following inflammatory mediators has been most closely associated with the magnitude of the inflammatory response to blunt trauma and with the development of Multiple Organ Dysfunction Syndrome (MODS)?
(1) Interleukin – I (IL-1).
(2) Beta-Human Chorionic Gonadotropin (β-HCG).
(3) Tumour Necrosis Factor-beta (TGF- β).
(4) Interleukin – 6 (IL-6).

33. Which of the following is not a prerequisite of gait?
(1) Foot prepositioning
(2) Stability instance
(3) Adequate stride length
(4) Conservation of energy

38. Which of the following is true regarding Superior Mesenteric Artery (SMA) syndrome?
(1) The condition often occurs in overweight female patients.
(2) This syndrome is also known as cast syndrome.
(3) The condition occurs following curve correction as a result of an increase in the angle between the aorta and the superior mesenteric artery.
(4) The condition is due to an ischemic event of the SMA.

39. All of the following contribute to the wrist and hand deformity in rheumatoid arthritis, EXCEPT-
(1) Volar subluxation of the Extensor Carpi Ulnaris (ECU).
(2) Radioscaphocapitate ligament failure.
(3) Scaphoid extension.
(4) Supination of the carpus on the forearm.

42. Bisphosphonates are used for all, EXCEPT –
(1) Osteosclerosis
(2) Osteoporosis
(3) Osteolytic bone metastasis
(4) Paget’s disease

43. A 35-year-old female presents with darkening of urine on standing, joint pain and stiffness and pigment deposition in joints. What is most probable diagnosis?
(1) Phenylketonuria
(2) Alkaptonuria
(3) Gout
(4) Tyrosinemia

44. Which of the following antibiotics is bacteriostatic at therapeutic serum concentrations?
(1) Penicillin
(2) Cefoxitin
(3) Clindamycin
(4) Vancomycin

45. Titanium, an extremely reactive metal is one of the most biocompatible implant material because –
(1) Nothing in the biologic environment reacts with titanium.
(2) Physiologic condition inhibit titanium reactions.
(3) Protein coat the titanium and insulate it from the body.
(4) Titanium spontaneously forms a stable oxide coating.