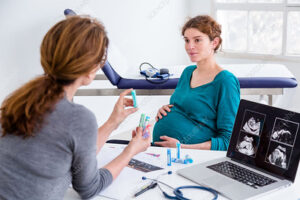 Here we are providing Sample Question Papers of Multiple Choice Questions in Obstetrics and Gynecological Nursing. Hence Candidates can use Gynecology NCLEX Questions Papers as a reference in your preparation.

Candidates who are preparing for Nursing Jobs, go through the below sections to get Multiple Choice Questions in Obstetrics and Gynecological Nursing Model Papers to practice. Gynecology NCLEX Questions Model Papers will help you to get a good score in the exam.

Model Questions and Answers on Obstetrics and Gynecological Nursing

1. Which one of the following factors does NOT put a woman at increased risk of obstetric complications?
(a) Both extremes of maternal age
(b) One previous Caesarean section
(c) A history of subfertility, with use of fertility drugs or assisted conception
(d) Family history of diabetes in a second-degree relative

2. The statements below refer to booking visit investigations—which is true?
(a) An ultrasound scan between 11 and 13+6 weeks should be offered.
(b) Screening for infections implicated in preterm labour, e.g. Chlamydia and bacterial vaginosis, are offered routinely.
(c) Best screening for chromosomal abnormalities includes AFP, oestriol and â-hCG as part of the combined test.
(d) Blood grouping is not performed until 28 weeks.

3. The Physiological changes that occur during pregnancy is
(a) Increase of blood volume by 100%
(b) White blood cell
(c) Cardiac output 40% decrease
(d) Peripheral resistance 50% increase

4. Screening versus diagnostic tests: which of the following is true?
(a) A screening test is performed on women with a ‘high risk’ to confirm or refute the possibility of a disorder
(b) A diagnostic test is available for all and gives a measure of the risk of being affected by a particular disorder
(c) Specificity is the probability that a subject who is negative will not have the condition.
(d) Sensitivity is the proportion of subjects with the condition classified as screen positive for the condition.

5. Which of the following is the Structural abnormalities identifiable as part of antenatal care:
(a) Preconceptual folic acid supplementation for 3 months (0.4 mg/day) reduces the incidence of neural tube defects and should be taken by all women considering pregnancy.
(b) Diaphragmatic hernias rarely result in the fetus having pulmonary hypoplasia.
(c) Fetal hydrops is common
(d) Cardiac anomalies occur in 3% of pregnancies.
6. A number of terms relating to concerns regarding fetal well being is
(a) Intrauterine growth restriction (IUGR) can only be present if the fetus is small for dates
(b) Small for dates (small for gestational age, SGA)
(c) By definition, 10% of babies are below the tenth centile and 3% below the third, for a particular gestation.
(d) None of the above

7. Which statement is appropriate regarding Ultrasound monitoring of twin pregnancy:
(a) All twins should have serial ultrasound scans, as a minimum at 28, 32 and 36 weeks
(b) In twin–twin transfusion syndrome (TTTS) the ‘donor’ twin gets volume overload.
(c) In TTTS, the ‘recipient’ twin is volume depleted and develops anaemia, IUGR and oligohydramnios
(d) Chorionicity is most accurately ascertained at the anomaly scan

8. Physiological change in the puerperium: which one of the following is false?
(a) Within 10 days the uterus is no longer palpable abdominally.
(b) The internal os of the cervix is closed by 3 days
(c) Menstruation is usually delayed by lactation, but occurs at about 6 weeks if the woman is not lactating.
(d) Bleeding usually stops within 10 days

11. Which of the statement is Maternal mortality:
(a) Maternal death is death of a woman during pregnancy or within 42 days of its cessation, from any cause related to or aggravated by pregnancy or its management, but not from accidental or incidental causes.
(b) Late maternal death is when a woman dies from similar causes, but specifically in the third trimester
(c) ‘Direct’ deaths result from obstetric complications
(d) ‘Incidental’ deaths are those that would have occurred irrespective of pregnancy

12. Consent and confidentiality: which three of the following are true?
(a) Minor risks need not be discussed. Major risks must be discussed even if they are rare
(b) The doctor has a moral, professional, contractual and legal duty to maintain patient confidentiality.
(c) Details can be disclosed to a close relative, without the patients consent.
(d) Confidentiality can be breached in exceptional circumstances where the health and safety of others would otherwise be at risk.

14. The protective effects of breast milk are known to be associated with
(a) IgM antibodies
(b) Lysozyme
(c) Mast cells
(d) IgA antibodies

15. In a woman using an intrauterine contraceptive device (IUCD) an intrauterine pregnancy occurs and the IUCD threads are visible, what is the reason to recommend removal of the device
(a) to prevent the risk of subsequent septic abortion and preterm labour
(b) to prevent congenital abnormality of the newborn
(c) to prevent postpartum haemorrhage
(d) to prevent perforation

16. Methods of prenatal testing for congenital abnormalities is:
(a) Nuchal translucency (the space between skin and soft tissue overlying the cervical spine), measured between 11 and 13+6 weeks, is a screening test for chromosomal abnormalities such as trisomy 21
(b) When the fetus has an open neural tube defect (NTD), maternal serum AFP levels are usually raised. As such, this can be used as a diagnostic test for NTD.
(c) Amniocentesis is safer than CVS before 12 weeks
(d) None of the above

17. The following are the changes that occurs in the uterus during pregnancy except
(a) uterine cavity enlarges by 500-1000 times
(b) body of the uterus enlages more than the fundus
(c) utero-placentak blood flow increases to about 500-600 ml/min
(d) during braxton Hicks contraction, there is stagnation of blood in the intervillus space

23. Induction of labour is less likely to be successful in all except
(a) Preterm pregnancy
(b) Elderly primigravida
(c) Prolonged retention pof IUD fetus
(d) Bishop’s score > 5

24. The process by which a viable product of conception is expelled by the mother is called
(a) Labour
(b) Presentation
(c) Attitude
(d) denominator

36. The moment in pregnancy when the pregnant woman starts to feel or perceive fetal movements is called
(a) Lightening
(b) Quickening
(c) Flexion
(d) attitude

37. The vaccines contraindicated during preganacy
(a) Rubella
(b) Measles
(c) mumps
(d) all of the above

38. Causes of hydramnios are all except
(a) Anecephaly
(b) spina fida
(c) dabetes mellitus
(d) hypothyroidism

39. Pregnancies should be strongly discontinued in a woman who has
(a) atrial septal defect
(b) patent ductus arteriosus
(c) eisenmenger syndrome
(d) rheumatic mitral stenosis

40. Regarding fetal moitoring by cardiotocography
(a) a sinusoidal FHR pattern is almost always associated with fetal hypoxia
(b) fetuses with congenital abnormalities always exhibit abnormal FHR patterns
(c) deceleration in the second stage is always pathological
(d) decreased base line variability may be due to drugs .

43. All are the high risk pregnancies associated with macrosomia except
(a) maternal obesity
(b) prolonged pregnancy
(c) previous history of large infant
(d) short stature

44. Which of the following is the investigation of choice in a pregnant lady at 18 weeks of gestation with past history of delivering baby with down’s syndrome ?
(a) triple screen test
(b) amniocentesis
(c) chorionic villous biopsy
(d) ultrsonography

45. The first stage of labour is said to be completed
(a) when the membrane rupture
(b) when the cervix fully dilated(10cm)
(c) when active phase of albour begins
(d) with the appearance of bearing down efforts

46. The first step to be done when head of the baby is delivered
(a) clearing the air passage
(b) placing the baby on a tray
(c) apgar rating
(d) clamping the umbilical cord

48. When the maximum diameter of the head stretches the vulval outlet without any recession of the head even after the contraction is over is called
(a) Quickening
(b) Crowning
(c) lightnening
(d) descending

50. Delivery of the head controlled by one hand
(a) to maintain flexion
(b) to prevent early extension of the head
(c) to prevent perineal and vulval tears
(d) all the above