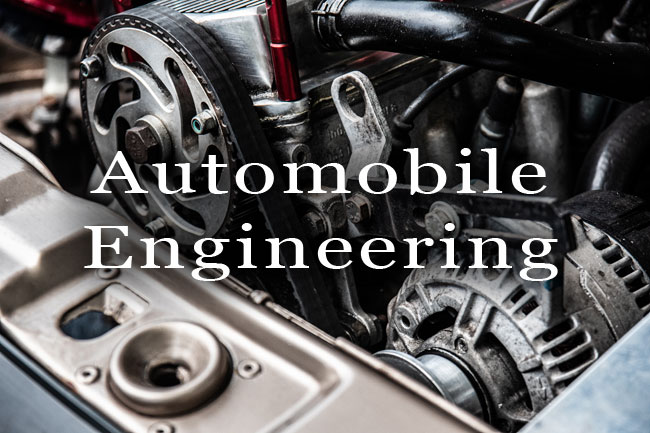 2. The inventor of two stroke engine is :
(A) Dugald Clark
(B) Rudolf diesel
(C) James Watt
(D) Nicolaus A Otto

4. The nominal volume of cylinder when piston is at TDC is called :
(A) Stroke volume
(B) Swept volume
(C) Clearence volume
(D) Suction volume

6. The process of flushing out the products of combustion from the engine cylinder by fresh charge is known as:
(A) Turbo charging
(B) Super charging
(C) Scavenging
(D) None of the above

13. Which of the following is true for a two stroke engine?
(A) fuel efficiency is more than four stroke engine of same size
(B) higher oil consumption
(C) used for two wheelers only
(D) eco friendly

14. Which type of nozzle can be used for facilitating pilot injection before the main injection?
(A) Single hole nozzle
(B) Multi hole nozzle
(C) Pintle nozzle
(D) Pimtaux nozzle

15. At the ventury throat of the Carburettor the velocity of air is :
(A) Maximum
(B) Decreases
(C) Increases
(D) Remains same as before

16. The condition at which the engine operates at no load and with nearly closed throttle is known as :
(A) Dieseling
(B) Cruising
(C) Idling
(D) None of the above

22. Which of the following is not a function of final drive of heavy vehicle?
(A) final speed reduction
(B) power transmission
(C) reduction of torque
(D) none of the above

23. Which of the following is not an advantage of overdrive?
(A) Fuel economy
(B) Increase of torque
(C) Reduced engine wear
(D) High vehicle speed at low engine speed

27. The tendency of front wheel drive cars with unequal length of half shaft to pull to oneside during acceleration is known as:
(A) Torque steer
(B) Self steer
(C) Power steer
(D) None of the above

30. Leaf springs are connected to frame through shackles for:
(A) reduce friction
(B) avoid breaking of spring
(C) avoid rolling of vehicle
(D) none of the above

34. The catalyst used for the reduction of NOx in three Way catalytic converter 18 :
(A) Platinum
(B) Palladium
(C) Rodium
(D) All of the above

35. The speed of distributor cam is –
(A) same as engine speed
(B) half of engine speed
(C) one fourth of camshaft speed
(D) none of the above

38. The secondary terminal of Ignition coil is connected to :
(A) Ameter
(B) Distributor cap
(C) Spark plug
(D) Battery

39. Which of the following unit is used to express the capacity of condensor?
(A) Tesla
(B) Webber
(C) Candela
(D) micro farads

40. The specific gravity of electrolyte can be checked with :
(A) Hygrometer
(B) voltmeter
(C) multimeter
(D) hydrometer

43. The speed of generator at which its output voltage just rises above the voltage of battery being charged is called :
(A) Cut in speed
(B) Synchronous speed
(C) Run off speed
(D) Run out speed

45. In an alternator current is induced in :
(A) Rotor winding
(B) Stator winding
(C) Carbon brushes
(D) Slip rings

46. In starter motor the field coils are wound around :
(A) Commutator
(B) Pole shoes
(C) Yoke
(D) None of the above

48. The purpose of filling inert gasses inside the bulb is –
(A) to reduce filament temperature
(B) to avoid dazzling effect
(C) to avoid vapourisation of filament
(D) none of the above