2. The International Court of Justice is located at
(a) Geneva
(b) Hague
(c) Amsterdam
(d) Vienna

4. Who was known as ‘Lady with Lamp”?
(a) Sarojini Naidu
(b) Joan of Arc
(c) Mother Teresa
(d) Florence Nightingale

6. Which of the following is the laterst from India to be recognised by the UNESCO’s World Heritage Committee for its ‘outstanding’ universal value’?
(a) Siliguri-Darjeeling Himalayan Railway
(b) Mahabodhi te nple complex at Bodhgaya
(c) Kalka-shimla railways
(d) Red fort

7. The outermost layer of Sun is called
(a) convection zone
(b) photosphere
(c) chromospheres
(d) corona

9. Who among the following Mughal Emperors had the longest reign?
(a) Bahadur Shah
(b) Jahandar Shah
(c) Farrukhsiyar
(d) Mohammad Shah

11. During which viceroy, Queen Victoria was crowned with ‘Kaiser-i-Hind’ in Delhi Durbar?
(a) Hastings
(b) Lytton
(c) Elgin
(d) Lord Minto

12. Which of the following institution? was not founded by Mahatma Gandhi?
(a) Phoenix Ashram
(b) Vishwa Bharati
(c) Sevagram Ashram
(d) Sabarmati Ashram

13. Inalandmark move, which of these State governments has set up a Savarna Aayog, a commission to identify the deprived and underprivileged families among upper castes?
(a) Uttar Pradesh
(b) Bihar
(c) Madhya Pradesh
(d) Rajasthan

14. Which of these countries has been added in the BRIG – (Brazil-Russia-India-China) grouping of emerging economies?
(a) South Korea
(b) Venezuela
(c) South Africa
(d) Russia

17. Which of the following appointments is not made by the President of India?
(a) Speaker of the Lok Sabha
(b) Chief Justice of India
(c) Chief of the Air Force
(d) Chief of the Army

18. Who among the following has the power to form a new state within the Union of India?
(a) President
(b) Prime Minister
(c) Supreme Court
(d) Parliament

19. Which of the following Chief Justices of India has acted as President of India?
(a) M Hidayatullah
(b) P B Gajendra Gadkar
(c) PN Bhagwati
(d) All of these

21. Which one of the following countries has the longest international boundary with India?
(a) Bangladesh
(b) Bhutan
(c) China
(d) Pakistan

22. Kanchipuram is in which of the following states?
(a) Kerala
(b) Andhra Pradesh
(c) Tamil Nadu
(d) Karnataka

23. The Sivasamudram Falls is on
(a) River Cauvery
(b) River Subernarekha
(c) River Indravati
(d) None of these

24. Which are the west-flowing rivers of southern India which flow into Arabian Sea?
(a) Chambal and Betwa
(b) Damodar and Mahanadi
(c) Narmadaand Tapti
(d) Krishna and Cauveri

25. The Vindhyas belong to which class of mountains?
(a) Block mountains
(b) Fold mountains
(c) Volcanic mountains
(d) Residual mountains

27. Optic fibres are mainly used for which of the following?
(a) Communication
(b) Weaving
(c) Musical instruments
(d) Food industry

28. ‘Ohm’ is the unit of
(a) Resistance
(b) specific resistance
(c) conductivity
(d) None of these

31. Who laid the foundation of the first independent Turkish kingdom in India?
(a) Mohammad Qasim
(b) Qutubuddin Aibak
(c) Ghiasuddin Balban
(d) Mohammad-bin-Tughlaq

32. Who among the following, destroyed the group of Forty Nobles?
(a) Bahram Shah
(b) Iltutmish
(c) Razia
(d) Balban

33. The Delhi Sultanate virtually ended due to the Invasion of
(a) Changez Khan
(b) Babur
(c) Nadir Shah
(d) Timor

34. The part of Delhi where Aibak laid the foundation of the first so called ‘Seven cities’ of medieval Delhi, was
(a) Mehrauli
(b) Shahjahanabad
(c) Din Panah
(d) Hauz Khas

35. In which region of India was the Suharawadi order of Sufism popular?
(a) Delhi and Bihar
(b) Delhi and Doab region
(c) Punjab and Sind
(d) Around Ajmer

36. In which of the following industries is the maximum number of women employed in India?
(a) Textile
(b) Jute
(c) Tea
(d) Coal

37. Which of the following committee was assigned to recommend reforms in the insurance sector?
(a) Rekhi Committee
(b) Nadkarni Committee
(c) Malhotra Committee
(d) Chelliah Committee

40. Which of the following is the largest part of the brain?
(a) Cerebrum
(b) Medula
(c) Thalmus
(d) Ceribrum

43. Which of the following has been found useful in keeping cholesterol level down?
(a) Tulsi
(b) Turmeric
(c) Garlic
(d) Serpentina

45. In Rigvedic society, which of the following was unknown?
(a) Polygamy
(b) Purdah system
(c) Polyandry
(d) Child marriage

47. Which of the following was not a kingdom in ancient India?
(a) Avanti
(b) Vatsa
(c) Hampi
(d) Kosala

48. Which of the following is known as Indian Napolean?
(a) Chandragupta Vikramaditya
(b) Samudragupta
(c) Ashoka
(d) Chandragupta Maurya

49. Who among the following is credited with the invention of Algebra?
(a) Aryabhatta
(b) Bhaskara
(c) Apastamba
(d) Medhatithi

50. The images in the temple of Angkorvat are those of
(a) Buddha
(b) Hindu deities
(c) Tirthankaras
(d) Cambodian Kings

51. The Khajuraho shrines built by Chandella rulers are dedicated to
(a) Vishnu and Shiva
(b) Indra and Varun
(c) Shiva and Parvati
(d) Vishnu and Brahma

52. Which of the following was not one of the features of Government of India Act, 1935?
(a) Provincial autonomy
(b) Dyarchy of centre
(c) Bicameral Legislature
(d) All India federation

53. Who Presided over the inaugural meeting of the Constituent Assembly of India?
(a) Sacchidananda Sinha
(b) B R Ambedkar
(c) Dr. Rajendra Prasad
(d) P Upendra

54. Who decides about the reasonableness of the restrictions placed on Fundamental Rights?
(a) Parliament
(b) President
(c) Courts
(d) Special Tribunal

55. What does the Ninth Schedule contain?
(a) Subjects on which State Legislature cannot legislate
(b) Laws which are protected from judicial scrutiny
(c) Provisions regarding defecting legislators
(d) List of religions in India 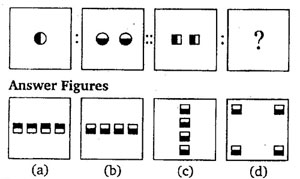 Directions (Q. Nos. 81-85) Read each of the following sentences carefully and find out whether there is any grammatical error. The error, if any, will be in one of the parts (a), (b) or (c). If there is no error, the answer is (d).

Directions (Q. Nos. 86-90) In each of the following questions, a word has been written in. four different ways, out of which only one is correctly spelt. Find out the correctly spelt word.

Directions (Q. Nos. 91-95) Each of the following idioms/phrases is followed by four alternatives, choose the one which best expresses its meaning.

Directions (Q. Nos. 96-100) In each of the following questions out of the four alternatives, choose the one which can be substituted for the given sentence.

96. One who does not care for literature or art
(a) Barbarian
(b) Illiterate
(c) Primitive
(d) Philistine

97. A government run by a dictator
(a) Theocracy
(b) Autocracy
(c) Democracy
(d) Oligarchy

98. One who acts only for money
(a) Misogynist
(b) Solvent
(c) Mercenary
(d) Fanatic

99. A speech or poem recited at the end of a play
(a) Epilogue
(b) Prologue
(c) Extempore
(d) Catalogue