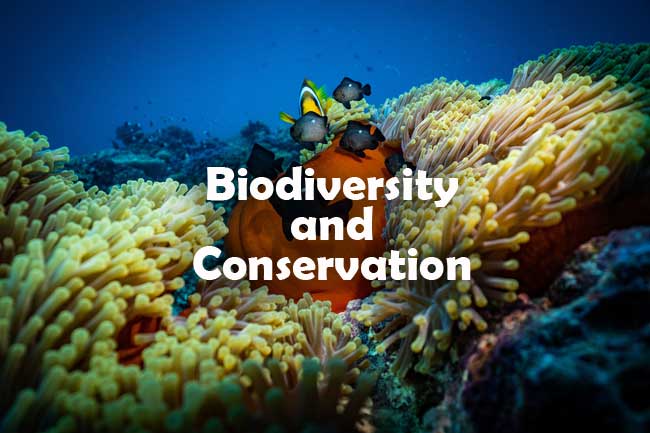 MCQ on Biodiversity and Conservation

1. When both ﬂora and fauna are conserved at the same place without any type of human intervention the conservation area is called—
A. Biosphere Reserve
B. Wildlife Sanctuary
C. National Park
D. Zoological Parks

4. The worst threat to wildlife is by—
A. habitat destruction
B. hunting
C. overgrazing
D. exotic species

9. A fish, Nile Perch, introduced into lake Victoria in East-Africa led to extinction of child fishes in the lake. This is an example for
A. fragmentation
B. over exploitation
C. coexistance
D. Invasion of alien species

11. A species facing extremely high risk of extinction in the immediate future is called—
A. Vulnerable
B. Endemic
C. critically endangered
D. extinct

12. The organisation which publishes the Red list of species-
A. ICFRE
B. IUCN
C. UNEP
D. WWF

13. The concept of Hotspots was first introduced by
A. Mayer
B. Simpson
C. Myers
D. David

17. Which of the following statements is correct?
A. Species diversity, in general, increases from poles to the equator
B. Conventional taxonomic methods are equally suitable for higher plants and microorganisms
C. India’s share of global species diversity is about 18%
D. There are about 25000 known species of plants in India.

18. According to IUCN Red list, during the last two decades, the maximum increase in the number of threatened species is among
A. Amphibians
B. reptiles
C. birds
D. mammals

20. Which of the following is the largest taxon among plants in terms of the number of species?
A. Algae
B. Mosses
C. Ferns
D. Fungi

21. One of the chief reasons among the following for the depletion in the number of species making it endangered is
A. over-hunting and poaching
B. greenhouse effect
C. competition and predation
D. habitat destruction

23. Which one of the following is not used for exsitu plant conservation?
A. Shifting cultivation
B. Botanical gardens
C. Field gene banks
D. Seed banks

24. Which of the following is not an invasive species?
A. Parthenium hysterophorus
B. Ocimum sanctum
C. Lantana camara
D. Eichhornia crassipes

26. Among various categories of threatened species the percentage of angiosperms categorised as vulnerable is about
A. 14%
B. 19%
C. 41%
D. 51%

27. An ecologist uses the term biodiversity for the variety of species of
A. all living plants
B. all living animals
C. both (a) and (b)
D. (a), (b) and microbes also living in their natural habitats

35. Which of the following is correctly matched?
A. Aerenchyma — Opuntia
B. Age pyramid — Biome
C. Parthenium hysterophorus — Threat to biodiversity »
D. Stratification — Population

36. Red list contains data or information on
A. all economically important plants
B. plants whose products are in international trade
C. threatened species
D. marine vertebrates only

37. Which is the National Aquatic Animal of India?
A. Blue whale
B. Sea-horse
C. Gangefic shark
D. River dophin

38. Which of the following is the most important cause of animals and plants being driven to extinction?
A. Habitat loss and fragmentation
B. Co-extinctions
C. Over-exploitation
D. Alien species invasion

40. One of the following statements is incorrect with reference to biodiversity. Identify it.
A. The areas with very few plant and animal species (low species richness) with no threatened species are called biodiversity hotspots.
B. Biodiversity increases from higher altitudes to lower altitudes.
C. Biodiversity decreases from the equator to polar regions.
D. Depletion in genetic diversity of crop plants is mainly due to the introduction of better varieties‘ with high yield, disease resistance, etc.

41. Which one of the following is not an conservation method?
A. National parks
B. Wild life sanctuary
C. Biosphere reserves
D. Zoological parks

42. One out of the following is not responsible for biodiversity loss
A. Alien species invasion
B. Co-extinction
C. Exsitu conservation
D. Deforestation

43. The species confined to a particular region and not found elsewhere is termed as
A. Endemic
B. Rare
C. Keystone
D. alien

44. Beta (B) diversity refers to diversity
A. within a community
B. between communities
C. between two ecozones
D. within a population

46. Which one of the following in an insitu method of biodiversity conservation?
A. National park
B. Botanical garden
C. Zoological garden
D. Scientific laboratory

54. Which of the following is not an exsitu conservation?
A. Cryopreservation
B. Seed bank
C. Biosphere reserves
D. Botanical garden

55. Species listed in Red list which presently have sufficient population but are facing the risk of extinction in medium term in future are called-
A. endangered species
B. vulnerable species
C. rare species
D. extinct species