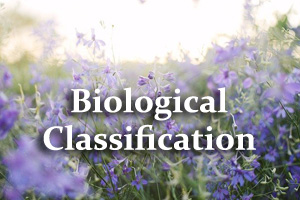 Also, helps in analyzing Three Kingdom Classification question and answers. Living Organism Classification question papers direct download links are given in this section. The aspirants who are going to appear for the NEET test can make use of these materials in their preparation. Taxonomy Biology Paper given below is only for reference purpose. The Animal Kingdom model paper on Biological Classification Questions and Answers may or may not come in the main examination.

1. Spliceosomes are not found in cells of :
A. Plants
B. Fungi
C. Bacteria
D. Animals

3. The primitive prokaryotes responsible for the production of biogas from the dung of ruminant animals, include that-
A. Thermoacidophiles
B. Methanogens
C. Eubacteria
D. Halophiles

5. Which of the following statements is wrong for viroids?
A. They are smaller than viruses
B. they cause infection
C. Their RNA is of high molecular weight
D. They lack a protein coat

6. Read the following statements regarding archaebacteria.
I. Their cell wall lacks peptidoglycan
II. They contain membrane bound organelles
III. These have distinct ribosomal RNA sequence
IV. Lipid in cell membrane of archaebacteria have different structure that those in all other organisms.
Choose the incorrect option.
A. I and II
B. Only II
C. Only IV
D. III and IV

8. DNA replication in bacteria occurs:
A. During S phase
B. Within nucleolus
C. Prior to fission
D. Just before transcription

9. Mycorrhizae are the example of-
A. Fungistasis
B. Antibiosis
C. Amensalism
D. Mutualism

12. Which one of the following is wrong for fungi?
A. They are eukaryotic
B. All fungi possess a purely cellulosic cell wall.
C. They are heterotrophic
D. They are both unicellular and multicellular.

13. One of the major components of cell wall of most fungi-
A. Cellulose
B. Hemicelluloses
C. Peptidoglycan
D. Chitin

15. Yeast is not included in protozoans but in fungi because
A. it has chlorophyll
B. it shows saprotrophic mode of nutrition
C. it has eukaryotic organization
D. cell wall is made up of cellulose and reserve food material as starch.

17. Which of these is wrong about diatoms?
A. Microscopic
B. Planktonic
C. Overlapping shells
D. Spores with 2 flagella

19. Consider the following statements with respect to fungi.
A. They show a great diversity in morphology and habitat.
B. The white spots seen on mustard leaves are due to a saprophytic fungus.
C. They prefer to grow in cold and humid places.
D. The cell walls of fungi are composed of chitin and polysaccharides.
A. A and B are correct
B. A and D are correct
C. A and C are correct
D. B and D are correct

20. In which group of organisms the cell walls form two thin overlapping shells which fit together?
A. Euglenoids
B. Chrysophytes
C. Dinoflagellates
D. Slime moulds

21. Pick up the wrong statement-
A. Cell wall is absent in Animalia
B. Protista have photosyntheticand heterotrophic modes of nutrition
C. Some fungi are edible
D. Nuclear membrane is present in Monera.

22. Cell wall is absent in-
A. Mycoplasma
B. Nostoc
C. Aspergillus
D. Funaria

23. Which one of the following antibiotics kills bacterial cells by inhibiting the polymerization of peptidoglycan?
A. Aminoglycosides
B. Fluoroquinolones
C. Quinines
D. Penicillins

24. Which one is a wrong statement?
A. Haploid endosperm is typical feature of Gymnosperms
B. Brown algea have chlorophyll a and c and fucoxanthin.
C. Archegonia are found in Bryophyta, Pteridophyta and Gymnosperms
D. Mucor has biflagellate zoospores.

25. Select the wrong statement.
A. The term ‘contagium vivum fluidum’ was coined M. W. Beijerinck.
B. Mosaic disease in tobacco and AIDS in human being are caused by viruses.
C. The viroids were discovered by D J Ivanowsky.
D. W M Stanley showed that viruses could be crystallised.

26. What do we call a proteinaceous particle that can replicate inside host cell and cause disease?
A. Virion
B. Prion
C. Viroid
D. Phage

28. A bacteria undergoes binary fission in every minute. This bacterium can fill up a cup in 1 hour. In how much time will the cup be half filled?
A. 30 minutes
B. 59 minutes
C. 25 minutes
D. 55 minutes

29. Which of the following are likely to be found in deep thermal vents?
A. Eubacteria
B. Archaea
C. Fungi
D. BGA

30. Which of the following characters belong to the kingdom Monera?
A. Eukaryotic
B. Heterotrophic
C. Presence of cell walls made of cellulose
D. Presence of nuclear membrane

31. Which are not relevant to Archaebacteria from the following statements
A. They live in some of the most harsh habitats
B. They are present in the gut of several ruminant
C. They are characterized by the presene of a rigid cellulosic cell wall
D. They include mycoplasma
E. They are also referred to as blue-green algae.
A. (A), (B) and (C)
B. (C), (D) and (E)
C. (A), (C) and (E)
D. (A), (C) and (D)

32. Archaebacteria differ from eubacteria in-
A. cell membrane structure
B. mode of nutrition
C. cell shape
D. mode of reproduction

34. Viruses have-
A. DNA enclosed in a protein coat
B. prokaryotic nucleus
C. single chromosome
D. Both DNA and RNA

35. Which one of the following living organisms completely lacks a cell wall?
A. Cyanobacteria
B. Saccharomyces
C. Blue-green algae
D. Sea-fan (Gorgonial)

36. Which one of the following is a very good pollution indicator?
A. Fungi
B. Lichens
C. Slime moulds
D. Euglenoids

38. Which of the antibiotic is not produced by one of the Monera (Streptomyces)?
A. Erythromycin
B. Penicillin
C. Streptomycin
D. Tetramycin

39. Colletotrichum is an example of
A. Basidiomycetes
B. Deuteromycetes
C. Ascomycetes
D. Phycomycetes

40. Sexual reproduction does not occur in-
A. Ascomycetes
B. Deuteromycetes
C. Basidiomycetes
D. Phycomycetes

43. Enzymes are not found in-
A. Fungi
B. Cyanobacteria
C. Virus
D. Algae

44. Select the wrong statement :
A. Viroids were discovered by D. J. Ivanowski
B. W.M. Stanley showed that viruses could be crystallized
C. The term ‘contagium vivum fluidum’ was coined by M. W. Beijerinck
D. Mosaic disease of tobacco and AIDS in human beings are caused by viruses.

45. Five kingdom system of classification suggested by RH Whittaker is not based on-
A. a presence or absence of a well defined nucleus
B. mode of reproduction
C. mode of nutrition
D. complexity of body organisation.

46. Archaebacteria differ from eubacteria in
A. a cell membrane structure
B. mode of nutrition
C. cell shape
D. mode of reproduction

47. The motile bacteria are able to move by a
A. Fimbriae
B. Flagella
C. Cilia
D. pill

48. Which one of the following fungi contains halluciongens?
A. Morchella esculenta
B. Amanita muscaria
C. Neurospora sp.
D. Ustilago sp.

49. The component of bacteria that retains the crystal violet stain during Gram-staining is
A. O-antigen
B. Lipopolysaccharide
C. Peptidoglycan
D. Cytoplasmic membrane

50. Which of the following bacteria that retains the crystal violet stain during Gram-staining is-
A. Escherichia coli
B. Bacillus subtilis
C. Streptococcus pyogenes
D. Micrococcus flavus