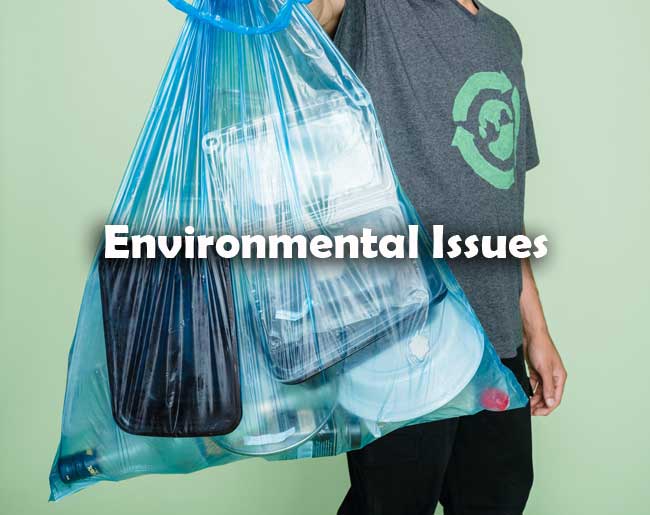 3. A scrubber in the exhaust of a chemical industrial plant removes-
A. gases like ozone or methane
B. gases like sulphur dioxide
C. gases like nitrous oxide
D. particulate matter of the size 5 micrometers or above.

4. Which of the following would most likely help to slow down the greenhouse effect?
A. Converting tropical forests into grazing land for cattle
B. Ensuring that all excess paper packaging is burned to ashes
C. Redesigning landfill dumps to allow methane to be collected
D. Promoting the use of private rather than public transport.

7. The beauty of Taj Mahal is endangered due to-
A. degradation of marble due to high temperature
B. discharge of industrial waste in Yamuna river
C. air pollutants released from oil refinery
D. riparian erosion.

8. Examples of secondary air pollutants is/are-
A. Smog
B. O3
C. PAN
D. all of these

9. The polluting strength of sewage is usually characterised by its-
A. BDO
B. nitrogen content
C. ozone content
D. eutrophication

11. Eutrophication is the natural ageing of lake by-
A. sewage enrichment
B. nutrient enrichment
C. physical enrichment
D. fertilisers enrichment

15. The zone of atmosphere in which the ozone layer is present is called-
A. Ionosphere
B. Mesosphere
C. Stratosphere
D. troposphere

17. A location with luxuriant growth of lichens on the trees indicates that the-
A. trees are very healthy
B. trees are heavily infested
C. location is highly polluted
D. location is not polluted

20. Main cause of eutrophication is—
A. fluctuation of temperature
B. unusual growth of aquatic vegetations
C. enrichment of nutrients
D. abundance of microoganisms

23. The ozone hole over Antactica develops each year between—
A. late December and early February
B. late February and early April
C. late April and early June
D. late August and early October

34. ‘Knock knee’ syndrome occurs due to the pollution of—
A. Nitrates
B. Phosphates
C. fluorides
D. heavy metals

36. The second commitment period for Kyoto Protocol was decided at—
A. Durban
B. Bali
C. Doha
D. Cancun

37. Which one of the following is not correct with regard to the harmful effects of particulate matter of the size 2.5 micrometers or less?
A. It can cause respiratory problems
B. It can directly enter into our circulatory system
C. It can cause inflammation and damage to the lungs
D. it can be inhaled into the lungs.

40. In an area where DDT had been used extensively, the population of birds declined significantly because—
A. birds stopped laying eggs
B. earthworms in the area got eradicated
C. cobras were feeding exclusively on birds
D. many of the birds laid eggs, did not hatch.

41. Which one of the following statements is not valid for aerosols?
A. They are harmful to human health.
B. They alter rainfall and monsoon patterns.
C. They cause increased agricultural productivity.
D. They have negative impact on agricultural land.

42. Biochemical Oxygen Demand (BOD) may not be a good index for pollution for water bodies receiving effluents from-
A. domestic sewage
B. dairy industry
C. petroleum industry
D. sugar industry

44. The highest DDT concentration in aquatic food chain shall occur in—
A. Phytoplankton
B. Seagull
C. Crab
D. eel

45. A river with an inflow of domestic sewage rich in organic waste may result in—
A. an increased production of fish due to biodegradable nutrients
B. death of fish due to lack of oxygen
C. drying of the river very soon due to algal bloom
D. increased population of aquatic food web organisms. [NEETP/tM&-I’16]

46. Depletion of which gas in the atmosphere can lead to an increased incidence of skin cancers?
A. Ammonia
B. Methane
C. nitrous oxide
D. ozone

50. A scrubber in the exhaust of a chemical industry removes—
A. nitrous oxide
B. hydrogen sulphide
C. carbon dioxide
D. sulphur dioxide

54. Which of the following are most suitable V indicators of SO2 pollution in the environment?
A. Algae
B. Fungi
C. Lichens
D. Conifers

56. Eutrophication of water bodies leading to killing of fishes is mainly due to non-availability of—
A. essential minerals
B. oxygen
C. food
D. light

57. Increase in concentration of the toxicant at successive trophic levels is known as—
A. Biotransformation
B. biogeochemical cycling
C. biomagnificafion
D. biodeterioration