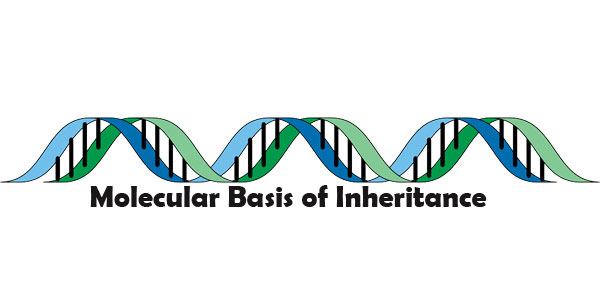 1. Which of the following RNAs should be most abundant in animal cell?
A. r-RNA
B. t-RNA
C. m-RNA
D. mi-RNA

2. The final proof for DNA as the genetic material came from the experiments of-
A. Griffith
B. Hershey and Chase
C. Avery, Mcleod and McCarty
D. Hargobind Khorana

5. The association of histone H1 with a nucleosome indicates—
A. Transcription is occurring
B. (b) DNA replication is occurring
C. The DNA is condensed into a Chromatin Fibre
D. The DNA double helix is exposed

7. DNA dependent RNA polymerase catalyses transcription on one strand of the DNA which is called the—
A. template strand
B. coding strand
C. alpha strand
D. antistrand

8. The equivalent of a structural gene is—
A. Muton
B. Cistron
C. Operon
D. recon

12. A complex of ribosomes attached to a single strand of RNA is known as—
A. Polypeptide
B. okazaki fragment
C. polysome
D. polymer

13. Which of the following is required as inducer (s) for the expression of Lac operon?
A. Lactose
B. Lactose and Galactose
C. Glucose
D. Galactose

15. Which of the following is not required for any of the techniques of DNA fingerprinting available at present?
A. Restriction enzymes
B. DNA-DNA hybridisation
C. Polymerase chain reaction
D. Zinc finger analysis

17. Some of the steps of DNA fingerprinting are given below. Identify their correct sequence from the options given.
A. Electrophoresis of DNA fragments.
B. Hybridisation with DNA probe
C. Digestion of DNA by restriction endonucleases
D. Autoradiography
E. Blotting of DNA fragments to nitrocellulose membrane
A. C—A—B—E—D
B. C—A—E—B—D
C. A—E—C—B—D
D. A—C—E—D—B

18. Consider the statements regarding lac operon and choose the correct option.
(i) Lactose is the substrate for the enzyme beta-galactosidase and regulates ‘switching on and off‘ of the operon.
(ii) Lac operon consists of three regulatory genes.
(iii) Lac operon consists of one structural gene.
(iv) Regulation of /ac operon by repressor referred to as positive regulation.
A. (i) and (ii) only are correct
B. (iii) and (iv) only are correct
C. (i) only is correct
D. (iv) only is correct.

21. The scientist (s) who performed experiments with heavy isotopes of nitroen to prove that replicates semi conservatively is /are—
A. Fredrick Griffith
B. Watson and Crick
C. Taylor
D. Meselson and Stahl

24. If the four bases of DNA have to code for twenty amino acid, the code should constitute a combination of bases. This was proposed by—
A. Rosalind
B. Har Gobind Khorana
C. George Gamow
D. Marshall Nirenberg

26. Which one of the following does not follow the central dogma in molecular biology?
A. HIV
B. E.Coli
C. Mucor
D. Chlamydomonas

30. The process of transfer of genetic information from DNA to RNA is called-
A. Transcription
B. Translation
C. Replication
D. degeneracy

31. Satellite DNA is important because it—
A. does not code for proteins and is same in all members of the population
B. codes for enzymes needed for DNA replication
C. codes for proteins needed in cell cycle
D. shows high degree of polymorphism in population and also the same degree of polymorphism in an individual, which heritable from parents to children.

46. The codon AUG has dual function. It is an initiation codon and also codes for—
A. Phenylalanine
B. Formaldehyde
C. Serine
D. methionine

48. The transfer of genetic material from one bacterium to another via viruses is called-
A. Transformation
B. Conjugation
C. Recombination
D. transduction

50. Which of the following is correct regarding RNA processing?
A. In capping, methyl guanosine triphosphate is added to 3′ end of hnRNA.
B. RNA polymerase I transcribes tRNA eukaryotes.
C. In tailing, adenylate residues are added at 3′ end of hnRNA
D. Three types of RNA polymerases catalyse the transcription of three different types of RNAs in most bacteria.