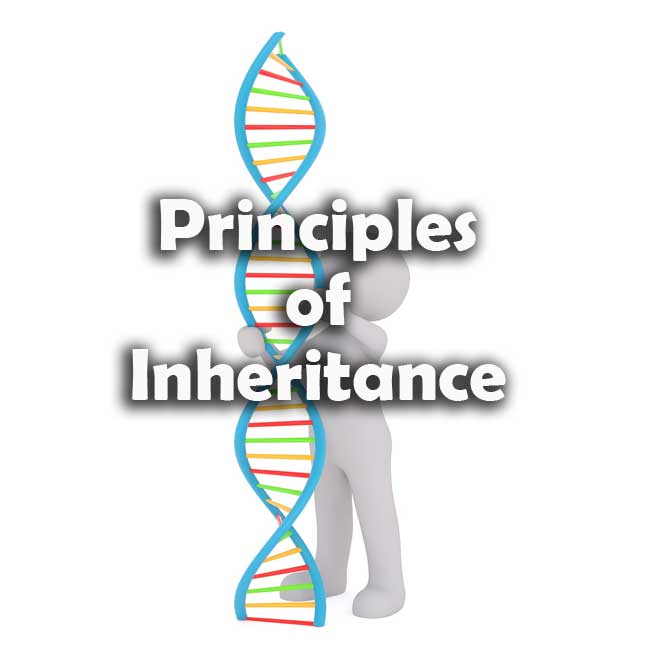 MCQ Objective on Principles of Inheritance

2. The gene disorder phenylketonuria is an example for—
A. multiple allelism
B. polygenic inheritance
C. multiple factor
D. pleiotropy

4. A pleiotropic gene-
A. controls a trait only in combination with another gene
B. controls multiple traits in an individual
C. is expressed only in primitive plants
D. is a gene evolved during Pliocene.

5. A gene showing codominance has-
A. alleles that are recessive to each other
B. both alleles independently expressed in the heterozygote
C. one allele dominant on the other
D. alleles tightly linked on the same chromosome.

6. In his classic experiments on pea plants, Mendel did not use—
A. seed shape
B. flower position
C. seed colour
D. pod length

10. An example for codominance is—
A. eye colour in Drosophila
B. seed shape and colour in plants
C. AB blood group in man
D. haemophilia in man

11. The nuclear structure observed by Henkings in 50% of the insect sperm after spermatogenesis was—
A. X body
B. Autosome
C. Y chromosome
D. nucleolus

12. Physical association of genes on a chromosome is called-
A. Repulsion
B. Linkage
C. Aneuploidy
D. Duplication

17. Down‘s syndrome is characterised by—
A. 19 tirsomy
B. 21 trisomy
C. only one X chromosome
D. two X and one Y chromosome

18. If a genotype consists of different types of alleles, it is called-
A. Homozygous
B. Heterozygous
C. Monoallelic
D. uniallelic

20. During the experiments, Mendel called genes by the term-
A. traits
B. characters
C. factors
D. qualifies

22. The experimental material in Mendel‘s experiment was—
A. Pisum sativum
B. Oryza safiva
C. Mirabilis jolapa
D. none of these

23. The chromosomal theory of linkage was contributed by—
A. Morgan
B. Punnett
C. Bateson
D. Boveri

25. Arrangement of sex chromosomes in Klinefelter’s syndrome is-—
A. XX
B. XY
C. XXY
D. XO

28. Mendel selected Pisum sativum for his experimental investigations among various plants available in the Monastery garden. Which of the following can be a reason for this?
A. It has a short life cycle
B. It has distinctive, contrasting traits like tall and dwarf plant.
C. It easily undergoes self pollination
D. All of these

31. Mating of an organism to double recessive in order to determine whether it is homozygous or heterozygous for a character under consideration is called—
A. reciprocal cross
B. test cross
C. dihybrid cross
D. back cross

32. Inheritance of ABO blood grouping is an example of—
A. Dominance
B. Condominance
C. incomplete dominance
D. both (a) and (b)

33. ‘X0’ type of heterogametic males are seen in—
A. Grasshoppers
B. Birds
C. Drosophila
D. humans

39. Among the following character, which one was not considered by Mendel in his experiment on pea?
A. Stem-Tall or Dwarf
B. Trichomes-Glandular or non-glandular
C. Seed-Green or Yellow
D. Pod—Inflated or Constricted

49. If both parents are carriers for thalassaemia, which is an autosomal recessive disorder, what are the chances of pregnancy resulting in an affected child?
A. 25%
B. 100%
C. No chance
D. 50%

55. Which of the following disorder is caused by autosomal aneuploidy?
A. Down’s syndrome
B. Haemophilia
C. Sickle cell anemia
D. Phenylketonuria