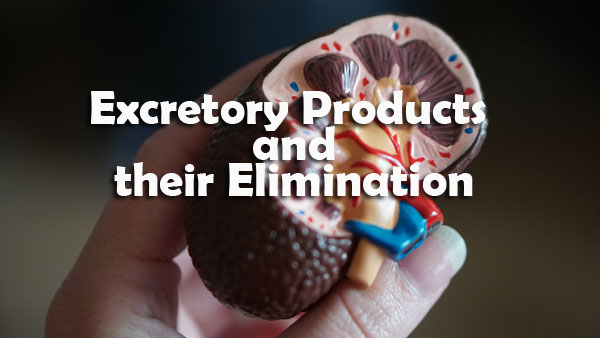 MCQ on Excretory Products and their Elimination

4. In mammals, ammonia produced by metabolism is converted into urea in the—
A. Kidney
B. Liver
C. spleen
D. blood

6. Facultative absorption of water from primary urine is influenced by the hormone—
A. Vasopressin
B. Androgens
C. Thyroxine
D. epinephrine

8. When kidney of a person is damaged, he/she invariably suffers from anaemia because-
A. RBCs pass through the glomerulus
B. sufficient erythropoietin is not produced
C. haemoglobin is not synthesised sufficiently
D. iron and vitamin B12 are not able to bind to haemoglobin.

12. Human urine is usually acidic because-
A. potassium and sodium exchange generates acidity
B. hydrogen ions are actively secreted into the filtrate
C. the sodium transporter exchanges one hydrogen ion for each sodium ion, in peritubular capillaries
D. excreted plasma proteins are acidic

13. Which hormone is responsible for reabsorption of water in kidney?
A. ADH
B. STH
C. ACTH
D. GTH

14. Which one of the following components of urine in a healthy human does not differ much in concentration from that of blood plasma?
A. NH4+
B. K+
C. Na+
D. SO4-

15. Vasa recta refers to-
A. rectum region of the insects
B. blood capillaries in invertebrates
C. a fine blood capillary network of afferent arteriole
D. a fine capillary which runs parallel to Henle’s loop

16. Choose the wrong statement regarding urine formation-
A. filtration is non-selective process performed by glomerulus.
B. The glomerular capillary blood pressure causes filtration of blood through three layers.
C. GFR in a healthy individual is approximately 125 ml/min.
D. The ascending limb of the Henle’s loop is permeable to water but allows transport of electrolytes actively or passively.

17. The ornithine cycle occurs in the-
A. Hepatocytes
B. Adipocytes
C. Osteocytes
D. histiocytes

18. Which of the following is not secreted in urine?
A. Niacin
B. Ascorbic acid
C. Cholecalciferol
D. Thiamine

23. What is added to the blood during haemodialysis to prevent blood clotting?
A. Haemoglobin
B. Haemocyanin
C. Heparin
D. Thrombin

25. Identify the correct statement regarding urine formation.
A. counter current mechanism works around the glomerulus and PCT.
B. To prevent diuresis, ADH facilitates water reabsorption from the latter parts of tubule.
C. Maximum absorption of electrolytes occurs in the Henle’s loop.
D. A decrease in blood pressure can increase the glomerular filtration rate.

28. Which of the following causes decrease in blood pressure?
A. Renin
B. Angiotensin
C. ANF
D. None of these

29. Which of the following are not ureotelic?
A. Mammals
B. Terrestiral amphibians
C. Aquatic insects
D. Birds
A. A&D
B. B&D
C. C&D
D. A&C

31. Uricotelism is found in—
A. mammals and birds
B. birds, reptiles and insects
C. fishes and freshwater protozoans
D. frogs and toads

32. If excess of uric acid is not excreted from the body it will affect—
A. Kidney
B. Liver
C. skeletal joints
D. lungs

33. The accumulation of urea in the blood due to malfunctioning of kidneys is referred as—
A. Uremia
B. renal calculi
C. edema
D. glomerulonephritis

34. Snake, a terrestrial animal that excretes nitrogen wastes in the form of uric acid, is called—
A. Uricotelic
B. Ureotelic
C. ammonotelic
D. not confirmed for any type

35. Which of the following is true for excretion in humans?
A. Glucose and amino acids are reabsorbed in PCT by simple diffusion.
B. DCT is impermeable to water.
C. On an average, 25-30 gm of urea is excreted out per day.
D. Maximum reabsorption occurs in the loop of Henle.

40. Juxtaglomerular cells secrete A when there is a fall in B ion concentration.
Choose the correct pair labelled as A and B.
A. A: Renin B : Chloride
B. A: Carbonic anhydrase B : Sodium
C. A : ATPase B : Potassium
D. A: Renin B : Sodium

42. Which one of the following characteristics is common both in humans and adult frogs?
A. four chambered heart
B. Internal fertilisation
C. Nucleated RBC‘s
D. Ureotelic mode of excretion

45. Uric acid is the chief nitrogenous component or excretory product of—
A. Man
B. Earthworm
C. Cockroach
D. frog

49. Which one of the following is correct for a normal human?
A. pH of urine is around 8
B. On an average, 25-30 mg of urea is excreted via urine.
C. Presence of ketone bodies in urine is an indicator of diabetes mellitus.
D. Glycosuria can be treated with hemodialysis.

50. Choose the wrong statement.
A. In ureotelic organisms, ammonia is not a product of metabolism.
B. ln mammals some amount of urea may be retained in the kidney matrix of ureotelics to maintain osmolarity.
C. In fishes, kidneys do not play any significant role in the removal of ammonium ions.
D. Urea and uric acid are less toxic than ammonia.

51. The part of a nephron which opens into the collecting duct is/are—
A. oct
B. DCT and PCT
C. Henle‘s loop
D. Glomerulus

52. Which of the following is excreted in human urine?
A. Ammonia
B. Urea
C. Uric acid
D. Amino acid