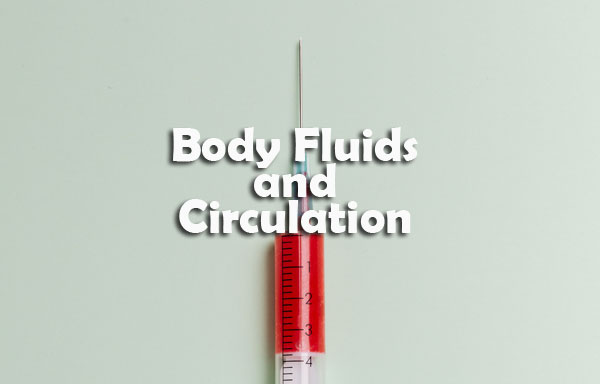 3. Select the incorrect statement out of the following-
A. Neutrophils constitute the majority of leucocytes.
B. Eosinophils resist infection.
C. Basophils secrete histamine and serotonin.
D. RBCs in mammals are enucleated and biconvex in shape.

5. Choose the correct statement among the following-
A. Atrio-ventricular node is the pacemaker that generates action potential and initiates the atrial systole.
B. During each cardiac cycle, the ‘lubb’ sound is due to the closure of semilunar valves.
C. Stroke volume in each cardiac cycle is approximately 170 ml of blood.
D. QRS complex in an ECG indicates depolarisation of ventricles.

6. The T-wave in an ECG represents—
A. depolarisation of ventricles
B. electrical excitation of atria
C. beginning of systole
D. return of ventricles from excited state.

11. Which valve is present at the opening of coronary sinus?
A. Mitral valve
B. Eustachian valve
C. Thebesian valve
D. Tricuspid valve

12. Thrombokinase is associated with—
A. elimination of urea and other excretory products
B. production of erythrocytes from the bone marrow
C. pulmonary and systemic circulation
D. enzymatic reactions in coagulation of blood

13. identify the correct statement regarding cardiac activity.
A. Normal activity of the human heart is regulated intrinsically, hence, it is neurogenic.
B. A special neural centre in the medulla oblongata can moderate the cardiac function through the CNS.
C. Parasympathetic neural signals increase the rate of heart beat.
D. Adrenal medullary hormones can increase cardiac output.

14. The depolarisation of the atria is represented by—
A. P-wave
B. Q wave
C. T-wave
D. QRS complex

19. Most of our cells are surrounded by—
A. Blood
B. fluid equivalent to sea water in salt composition
C. interstitial fluid
D. pure water

20. Originating in bone marrow, circulating in blood for 1 -2 days, “migrating to connective tissue and forming macrophages is a characteristic of—
A. Eosinophils
B. Basophils
C. Monocytes
D. lymphocytes

22. If a person is undergoing artificial paceamaker transplant then at which of the following structures the transplantation occurs?
A. SA node
B. AV node
C. SA bundles
D. Right ventricle

24. Which one of the following human organs is often called the “graveyard” of RBCs?
A. Gal bladder
B. Kidney
C. Spleen
D. Liver

27. Adult human RBCs are enucleate. Which of the following statements (s) is/are most appropriate explanation for this feature?
(A) They do not need to reproduce.
(B) They are somatic cells.
(C) They do not metabolize.
(D) All their internal space is available for oxygen transport.
Options :
A. Only (D)
B. Only (A)
C. (A), (C) and (D)
D. (B) and (C)

29. Frog’s heart when taken out of the body continues to beat for sometime.
Select the best option from the following
statement
(A) Frog is a poikilotherm
(B) Frog does not have any coronary circulation.
(C) Heart is “myogenic” in nature.
(D) Heart is auto excitable.
A. Only (C)
B. Only (D)
C. (A) and (B)
D. (C) and (D)

30. Name the blood cells, whose reduction in number can cause clotting disorder, leading to excessive loss of blood from the body.
A. Erythrocytes
B. Leucocytes
C. Neutrophils
D. Thrombocytes

34. The granulocytes which secretes histamine, serotonin and heparin are-
A. Neutrophils
B. Basophils
C. Eosinophils
D. lymphocytes

38. Choose the wrong statement regarding human blood and circulatory system—
A. persons with blood group AB can receive blood from any person with any blood group.
B. calcium ions play any important role in blood clotting.
C. angina is acute chest pain when enough oxygen does not reach the brain.
D. In a myogenic heart the normal activities are regulated intrinsically.

40. Which one of the following animals has two separate circulatory pathways?
A. Whale
B. Shark
C. Frog
D. Lizard

41. Doctors use stethoscope to hear the sounds produced during each cardiac cycle. The second sound is heard when—
A. AV node receives signal from SA node
B. AV valves open up
C. Ventricular walls vibrate due to gushing in of blood from atria.
D. Semilunar valves close down after the blood flows into vessels from ventricles.

43. The heart is covered by—
A. epicardium
B. pericardium
C. supracardium
D. endocardium

45. Which one of the following is incorrect for ‘atherosclerosis’?
A. Constriction of arterial lumen reduces the blood flow
B. Loss of dilation ability of the arterial wall and its rupture.
C. Cholesterol deposition at the inner wall of the artery
D. Proliferation of the vascular muscles

47. Read the statements regarding the cardiac system and choose the right option.
A. Human heart is an ectodermal derivative.
B. Mitral valve guards the opening between the right atrium and left ventricle.
C. SAN is located on the left upper corner of the right atrium.
D. Stroke volume X Heart rate = Cardiac output.
A. A alone is correct
B. A and B alone are correct
C. B and C alone are correct
D. D alone is correct.

48. According to Best and Taylors’s theory, which of the following does not play any role in blood clotting?
A. Prothrombin
B. Fibrinogen
C. Platelets
D. Calcium ions

49. The frequency of heart beat in our body is maintained by—
A. AV Node
B. SA Node
C. Node of Ranvier
D. Chordae tendineae.

51. Which one of the following plasma proteins is involved in the coagulation of blood?
A. An Albumin
B. Serum amylase
C. A Globulin
D. Fibrinogen

53. ‘Bundle of His‘ is a part of which one of the following organs in humans?
A. Heart
B. Brain
C. Kidney
D. Pancreas