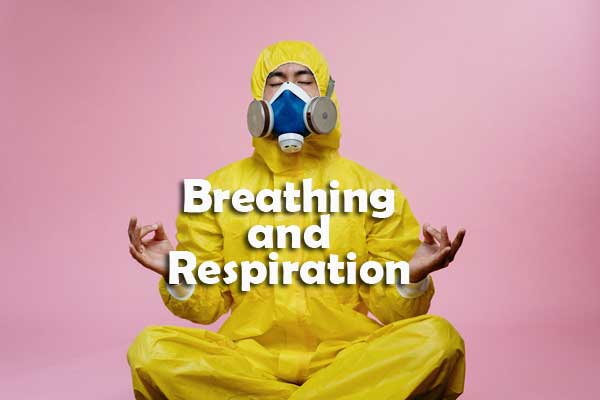 MCQ Objective on Breathing and Respiration

4. Reduction in pH of blood will—
A. decrease the affinity of haemoglobin with oxygen
B. release bicarbonate ions by the liver
C. reduce the rate of heart beat
D. reduce the blood supply to the brain.

8. Hiccups can be best described as—
A. forceful sudden expiration
B. forceful contraction of intercostal muscles during deep breathing
C. vibration of the soft palate during breathing while sleeping
D. jerky incomplete inspiration

9. Name the pulmonary disease in which alveolar surface area involved in gas exchange is drastically reduced due to damage in the alveolar walls—
A. Pneumonia
B. Asthma
C. Pleurisy
D. Emphysema

13. The volume of air that will remain in the lungs after a normal expiration is called—
A. vital capacity
B. functional residual capacity
C. residual volume
D. total lung capacity

14. The entry of food into the larynx is prevented by mitral valve diaphragm –
A. Mitral valve
B. Residual volume
C. Epiglottis
D. hyoid

15. Amount of air in the lungs that remains after deep breathing is called-
A. dead space
B. residual volume
C. vital capacity
D. ventilation rate

17. Approximately seventy percent of carbon dioxide absorbed by the blood will be transported to the lungs-
A. as bicarbonate ions
B. in the form of dissolved gas molecules
C. by binding to R. B. C.
D. as carbamino-haemoglobin.

18. The serous membrane which covers the lungs is called-
A. pericardium
B. peritoneum
C. perichondrium
D. pleura

20. The trachea terminates into—
A. bronchial tree
B. atrium
C. bronchi
D. alveoli

21. When percentage saturation of haemoglobin with O2 is plotted against p02, the obtained is—
A. J shaped
B. Hyperbola
C. sigmoid
D. U shaped

23. To generate pressure gradients to facilitate expiration and inspiration, the human body uses the intercostal muscles and—
A. alveolar sacs
B. bronchi
C. primary, secondary and tertiary bronchioles
D. diaphragm

24. Choose the wrong statement-
A. Solubility of col in blood is 20 – 25 times higher than that of O2.
B. The total volume of air accommodated in the lungs at the end of a forced inspiration is called the ‘vital capacity‘.
C. O2 can bind with haemoglobin in a reversible manner to form oxyhaemoglobin.
D. Every 100 mL of de-oxygeneted blood delivers approximately 4 mL of CO2 to the alveoli.

28. During the transportation of gases, to maintain the ionic balance, chloride ions shift from-
A. RBCs to plasma
B. plasma to RBCs
C. lungs to blood
D. blood to lungs

32. Which one of the following is the correct statement for respiration in humans?
A. Cigarette smoking may lead to inflammation of bronchi.
B. Neural signals from pneumotoxic centre in pons region of brain can increase the duration of inspiration.
C. Workers in grinding and stone—breaking industries may suffer, from lung fibrosis.
D. About 90% of carbon dioxide (CO2) is carried by haemoglobin as carbaminohaemoglobin.

35. Volume of air which remains in conducting airways and is not available for gas exchange is—
A. vital capacity
B. anatomic dead space
C. functional residual capacity
D. forced expiratory volume

36. Following are few characters of a disorder in human body.
(A) Inflammation of the mucous membrane of nasal passage.
(B) Watery secretions by mucous glands
(C) Continuous sneezing
(D) Eye watering
(E) Rise in body temperature
Identify the disorder from the choices given below—
A. Bronchial asthma
B. Rhinitis
C. Bronchial carcinoma
D. Emphysema

42. The enzyme essential for the transport of CO2 as bicarbonate in blood is—
A. Carboxypeptidase
B. succinic dehydrogenase
C. carbonic anhydrase
D. thrombokinase

44. Hypoxia corresponds to—
A. any change in the relative rates of development of different cell lines in body
B. hardening and loss of elasticity of arteries
C. deficiency of oxygen in body tissues
D. sudden interruption of blood flow to a portion of brain due to blockage of cerebral blood vessel.

46. A large proportion of oxygen is left unused in the human blood even after uptake by the body tissue. This oxygen—
A. is enough to keep oxyhaemoglobin saturation at 96%
B. helps in releasing more oxygen to epithelial tissues
C. acts as reserve during muscular exercise
D. raise pCo2 of blood to 75 mmHg

47. With conscious efforts one can—
A. breathe out air totally without oxygen breathe in and out by moving diaphragm alone without moving ribs at all
B. breathe out air through eustachian tube by closing both nose and mouth
C. empty the lungs completely by breathing out
D. all air out of them

48. Which one of the following can bind several hundred times more strongly to the haemoglobin than oxygen?
A. CO
B. Co2
C. So2
D. H2Co3

54. High percentage of CO2 and very low percentage of O2 may make a person unconscious due to—
A. Eupnoea
B. Emphysema
C. Suffocation
D. Asphyxia

57. In which of the following subjects, the dead space is highest-
A. Old man
B. Old woman
C. Young woman
D. Young man

58. Maximum amount 70 – 75% of carbon dioxide transport occurs as-
A. dissolved in plasma
B. carbaminohaemoglobin complex
C. bicarbonate
D. none of the above

62. The respiratory rhythm centre is present in the—
A. Cerebrum
B. Cerebellum
C. hypothalamus
D. medulla oblongata

63. Pick the correct statement—
A. Contraction of internal intercostal muscles lifts up the ribs and sternum
B. RBC’s transport oxygen only
C. Thoracic cavity is anatomically an air tight chamber
D. Healthy man inspire approximately 500mL of air per minute

64. Which is correct-
A. During inspiration, external intercostal muscles and diaphragm
B. Cyanosis means collapse of alveoli
C. Eupnoea is slow breathing
D. Coryza is caused by human corona virus

65. The amount of air that moves in and out of the lung, with each normal inspiration and expiration is called—
A. residual volume
B. vital capacity
C. tidal volume
D. tidal capacity

66. Which is true-
A. H+ ions released from carbonic acid combine with haemoglobin to form haemoglobinic acid
B. Oxyhaemoglobin of erythrocytes is alkaline
C. More than 70% of carbon dioxide is transferred from tissue to lungs as carbamino compounds
D. In lungs oxygen from alveoli reaches blood through active transport