Psychiatric Nursing Practice Test Questions with Answer key Papers are available in our page. However, to help the aspirants in getting their dream jobs we have given the direct download link for the Health Education Systems Incorporated Previous Year Question Paper Pdf on Psychiatric Nursing in the section below. 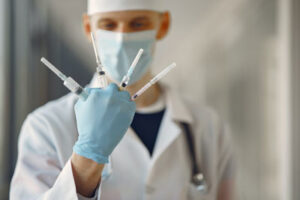 Aspirants can find free downloading for Topic wise Psychiatric Questions and Answers. Applicants can just click on those American Nurses Credentialing Center Sample Papers on Psychiatric Nursing and practice them to get a good score.

You can get all the Previous Year Question Papers of PMHNP here. Hence, applicants can download the PMHNP Model Papers on Psychiatric Nursing with Answers pdf from the below free downloading links. By practicing the last year papers of Certified Nursing Assistant, the candidates will understand how to manage time in the examination.

1. Which of the following statements best defines malingering?
(a) It’s a preoccupation with pain in the absence of physical disease
(b) It’s a voluntary production of a physical symptom for a secondary gain
(c) It’s a morbid fear or belief that one has a serious disease where none exists
(d) It’s associated with a psychological need or conflict in which the client shows one or more neurologic symptoms

2. A client with a history of panic attacks who says, “I felt so trapped,” right after an attack most likely has which of the following fears?
(a) Loss of control
(b) Loss of identity
(c) Loss of memory
(d) Loss of maturity

3. Which of the following nursing interventions is given priority in a plan of care for a person having a panic disorder?
(a) Till the client to take deep breaths
(b) Have the client talk about the anxiety
(c) Encourage the client to verbalize feelings
(d) Ask the client about the cause of the attack

4. Which of the following questions should a nurse ask to determine how agoraphobia affects the life of a client who has panic attacks with agoraphobia?
(a) How realistic are your goals?
(b) Are you able to go shopping?
(c) Do you struggle with impulse control?
(d) Who else in your family has panic disorder?

5. Which of the following short-term client outcomes is appropriate for a client with panic disorder?
(a) Identity childhood trauma.
(b) Monitor nutritional intake
(c) Institute suicide precautions
(d) Decrease episodes of disorientation

6. Which of the following group therapy interventions would be of primary importance to a client with panic disorder?
(a) Explore how secondary gains are derived from the disorder
(b) Discuss new ways of thinking and feeling about panic attacks
(c) Work to eliminate manipulative behavior used for meeting needs
(d) Learn the risk factors and other demographics associated with panic disorder

7. Clients with a social phobia would most likely fear which of the following situations?
(a) Dental procedures
(b) Meeting strangers
(c) Being bitten by a dog
(d) Having a car accident

8. Which of the following factors would the nurse find most helpful in assessing a client for a bloodinjection-injury phobia?
(a) Episodes of fainting
(b) Gregarious personality
(c) Difficulty managing anger
(d) Dramatic, overreactive personality

9. Which of the following behavior modification techniques is useful in the treatment of phobias?
(a) Aversion therapy
(b) Imitation or modeling
(c) Positive reinforcement
(d) Systematic desensitization

10. A client suspected of having posttraumatic stress disorder should be assessed for which of the following problems?
(a) Eating disorder
(b) Schizophrenia
(c) Suicide
(d) “sundown” syndrome

11. Which of the following symptoms of post-traumatic stress disorder would indicate that hypnosis is an appropriate treatment modality?
(a) Addiction
(b) Confabulation
(c) Dissociation
(d) Hallucinations

12. A client who has just had electroconvulsive (ECT) therapy asks for a drink. Which of the following assessments is a priority when meeting the client’s request?
(a) Take the client’s blood pressure
(b) Monitor the gag reflex
(c) Obtain a body temperature
(d) Determine the level of consciousness

13. A client with bipolar disorder who complaints of headache, agitation, and indigestion most likely experiencing which of the following problems?
(a) Depression
(b) Cyclothymia
(c) Hypomania
(d) Mania

14. Which of the following adverse reactions does the client with bipolar disorder taking lithium need to report?
(a) Black tongue
(b) Increased lacrimation
(c) Periods of disorientation
(d) Persistent GI upset

15. Which of the following facts does the nurse need to include when teaching the client with bipolar disorder and his family about the drug carbamazepine (Tegretol)?
(a) The risk of losing hair is a problem for clients taking the drug
(b) Clients most be closely monitored for nephrogenic diabetes insipidus
(c) Hematologic toxicity and bone marrow depression are serious adverse effects
(d) To avoid toxic reactions, most other drugs shouldn’t be taken concurrently

16. Which of the following mental disorders is associated with the gamma aminobutyric acid (GABA) complex?
(a) Alzheimer’s
(b) Anxiety
(c) Depression
(d) Posttraumatic stress disorder

17. A lack of dietary salt intake can have which of the following effects on lithium levels?
(a) Decrease
(b) Increase
(c) Increase then decrease
(d) No effect at all

18. A pervasive pattern of grandiosity, lack of empathy, and need for admiration suggests the diagnosis of which of the following personality disorders?
(a) Borderline
(b) Narcissistic
(c) Paranoid
(d) Passive-aggressive

19. The defense mechanism most often associated with paranoid personality disorder is_____
(a) Splitting
(b) Projection
(c) Isolation
(d) hypochondriasis

21. Which of the following behaviors patterns would a nurse expect to observe in a client with an obsessive compulsive personality disorder?
(a) Inflexible and lack of spontaneity
(b) Submissive and clinging
(c) Impulsive and unstable emotionally
(d) Cheerful and carefree

22. Which of the following behavioral patterns is characteristic of individuals with histrionic personality disorder?
(a) Belittling themselves and their abilities
(b) Overreacting inappropriately to minor stimuli
(c) Suspicious and mistrustful of others
(d) A lifelong pattern of social withdrawal

23. The expected behavior pattern of in a client with schizoid personality disorder is ____
(a) Submissive and clinging
(b) Emotional coldness and flattened affect
(c) Impulsive and unstable emotionally
(d) Cheerful and carefree

24. Which is a predisposing factor in the diagnosis of autism?
(a) Having a sibling diagnosed with mental retardation
(b) Congenital rubella
(c) Dysfunctional family systems
(d) Inadequate ego development

26. The nurse on an in-patient pediatric psychiatric unit is admitting a client diagnosed with an autistic disorder. Which would the nurse expect to assess?
(a) A strong connection with siblings
(b) An active imagination
(c) Abnormalities in physical appearance
(d) Absence of language

28. What is the group of drug commonly used for management of behavioral symptoms in ADHD children?
(a) Psychostimulants
(b) Benzodiaziphines
(c) Alpha tryphotphan
(d) Antidepressants

29. What is the gender identity disorders that results in the person believing he or she is the opposite sex?
(a) Exhibitionism
(b) Homosexuality
(c) Transsexualism
(d) Transvertitism

30. Among the following, which one manifestation is not associated with ADHD?
(a) Poor attention span
(b) Fidgety
(c) Impulsivity
(d) Dyslexia

31. Tourette’s disorder is typically characterised by all EXCEPT
(a) Multiple motor tics
(b) Multiple vocal tics
(c) Duration of less than 1 year
(d) Onset usually before 11 years of age

32. Among the following, which one is NOT a type of Psychosocial theory of aging?
(a) Personality theory
(b) Disengagement theory
(c) Developmental tasks theory
(d) Wear and tear theory

33. The most commonest psychiatric disorder among elderly is ______
(a) Depression
(b) Dementia
(c) Delirium
(d) Schizophrenia

34. The aspects of Indian disability Evaluation and Assessment Scale (IDEAS) all, EXCEPT
(a) Self care
(b) Duration of illness
(c) Interpersonal skill
(d) Intelligence

36. Among the following, which facility can provide the homeless child to have family like environment?
(a) Respite home
(b) Foster home
(c) Halfway home
(d) Custodial home