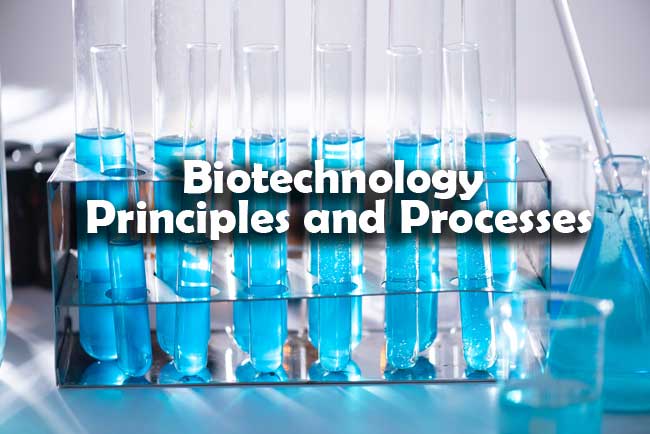 MCQ on Biotechnology Principles and Processes

1. The enzyme used to join the fragments of DNA during the process of replication is-
A. DNA polymerase
B. DNA ligase
C. Endonuclease
D. helicase

2. Bacteria protect themselves from viruses by fragmenting viral DNA upon entry with—
A. Methylase
B. Endonucleases
C. Ligases
D. exonucleases

3. The enzyme used for the purpose of joining a novel gene with host DNA is—
A. endonuclease
B. helicase
C. ligase
D. polymerase

7. Restriction endonucleases—
A. are synthesised by bacteria as part of their defence mechanism
B. are used for in vitro DNA synthesis
C. are used in genetic engineering for ligation of two DNA Molecules
D. are present in mammalian cells for degradation of DNA when the cell dies.

8. One of the methods by which DNA cannot be transferred to the host cell is by—
A. Microinjection
B. gene gun
C. disarmed pathogen vectors
D. polymerase chain reaction

9. Which one of these is not a tool of recombinant DNA technology?
A. Restriction enzyme
B. Vector
C. Polymerase enzyme
D. Introns

10. With respect to DNA fragmentation.
Statement A : Gel electrophoresis and elution are two important processes.
Statement B : After staining with ethidium bromide it has to be exposed to UV light.
A. only A is correct
B. both A and B are correct statements
C. only B is correct
D. only A is correct and B is not correct.

12. With respect to DNA fragmentation-
Statement A : Gel electrophoresis and elution are two important processes.
Statement B : After staining with ethidium bromide it has to be exposed to UV light.
A. only A is correct
B. both A and B are correct statements
C. only B is correct
D. only A is correct and B is not correct

13. Select the wrong statement.
A. The presence of chromogenic substrate gives blue colour colonies, if the plasmid in the bacteria does not have an insert.
B. Retroviruses in animals have the ability to transform normal cells into cancerous cells.
C. In microinjection, cells are bombarded with high velocity microparticles of gold or tungsten coated with DNA.
D. Since DNA is a hydrophilic molecule it cannot pass through cell membranes.

14. Which of the following is not a characteristic of pBR322 vector?
A. It is the first artificial cloning vector constructed in 1977 by Boliver and Rodriguez.
B. It is the most widely used, versatile and easily manipulated vector.
C. It has two antibiotic resistance genes, tetR and amp.
D. It does not have restriction site for Sal l.

18. In Vitro clonal propagation in plants is characterised by-
A. PCR and RAPD
B. northern blotting
C. electrophoresis and HPLC
D. microscopy

21. Bioreactors are useful in—
A. separation and purification of a product
B. processing of large volumes of culture
C. micro-injection
D. isolation of genetic material

23. The first recombinant DNA was constructed by linking an antibiotic resistant gene with the native plasmid of—
A. Escherichia coli
B. Salmonella typhimurium
C. Clostridium butylicum
D. Bacillus thuringiensis

25. EcoRl is-
A. used to join two DNA fragments
B. a restriction enzyme
C. the abbreviation for bacterium Escherichia coli
D. a plasmid

26. Identify the desirable characteristics for a plasmid used in rDNA technology from the following.
A. Ability to multiply and express outside the host in a bioreactor
B. A highly active promoter
C. A site at which replication can be initiated
D. One or more identifiable marker genes
E. One or more unique restriction sites
A. A, C, D and E only
B. A, C and E only
C. B, C and E only
D. B, C, D and E only

27. Which of the following is not correctly matched for the organism and its cell wall degrading enzyme?
A. Algae — Methylase
B. Fungi — Chitinase
C. Bacteria — Lysozyme
D. Plant cells — Cellulase

28. DNA fragments generated by the restriction endonucieases in a chemical reaction can be separated by—
A. Electrophoresis
B. restriction mapping
C. centrifugation
D. polymerase chain reaction

30. Which of the following is a cloning vector?
A. DNA of Salmonella typhimurium
B. Ti plasmid
C. Any DNA containing antibiotic resistance genes
D. Ori minus pBR322

31. During the process of isolation of DNA, chilled ethanol is added to-
A. precipitate DNA
B. break open the cell to release DNA
C. facilitate action of restriction enzymes
D. remove proteins such as histones

32. During amplification of gene using PCR, Taq polymerase is used between—
A. denaturation and annealing
B. annealing and extension
C. extension and amplification
D. none of the above

33. For transformation, micro-particles coated with DNA to be bombarded with gene gun are made up of—
A. silver or platinum
B. platinum or zinc
C. silicon or platinum
D. gold or tungsten.

34. PCR and restriction fragment length polymorphism are the methods for—
A. study of enzymes
B. genetic transformation
C. DNA sequencing
D. genetic fingerprinting

35. Which one is a true statement regarding DNA polymerase used in PCR?
A. It is used to ligate introduced DNA in recipient cells.
B. It serves as a selected marker.
C. It is isolated from a virus.
D. it remains active at high temperature.

38. The DNA fragments separated on an agarose gel can be visualised after staining with-
A. Bromophenol blue
B. Acetocarmine
C. Aniline blue
D. Ethidium bromide

39. A gene whose expression helps to identify transformed cell is known as-
A. Selectable marker
B. Vector
C. Plasmid
D. Structural gene

40. Which of the following restriction enzymes produces blunt ends?
A. Sal I
B. Xho I
C. Eco RV
D. Hind III

41. A foreign DNA and plasmid cut by the same restriction endonuclease can be joined to form a recombinant plasmid using—
A. Ligase
B. Taq polymerase
C. polymerase III
D. EcoRI

42. Which of the following is not a component of downstream processing?
A. Separation
B. Purification
C. Preservation
D. expression

43. Stirred-tank bioreactors have been designed for-
A. purification of product
B. addition of preservatives to the product
C. availability of oxygen throughout the process
D. ensuring anaerobic conditions in the culture vessel.

44. Which of the following is not a feature of the plasmids?
A. Transferable
B. single-stranded
C. Independent replication
D. circular structure

45. Which of the following is a restriction endonuclease?
A. DNasel
B. Hind II
C. RNase
D. Protease

47. Which one of the following statement is wrong with respect to separation of DNA fragments on gel electrophoresis?
(i) The DNA fragments resolve according to their size.
(ii) The DNA fragments move towards anode under electric field through the matrix.
(iii) The smaller DNA fragments separate first.
(iv) The commonly used matrix is agarose gel.
A. (i) & (ii)
B. (iii) & (iv)
C. (ii) & (iii)
D. none of these

48. Most suitable method of introducing alien DNA into a plant cell is—
A. Lipofection
B. Biolistics
C. heat shock method
D. microinjection

49. Elution means-
A. making the DNA bands visible under UV Radiation
B. separation of DNA fragments on agarose gel
C. isolating alien DNA from the choice organism
D. cutting and extraction of DNA bands from the agarose gel.

53. The cutting of DNA at specific location became possible with the discovery of—
A. selectable markers
B. ligases
C. restrction enzymes
D. probes

54. The DNA molecule to which the gene of interest is integrated for cloning is called—
A. Template
B. Carrier
C. transformer
D. vector

55. Restriction endonucleases are—
A. used for in vitro DNA synthesis
B. synthesised by bacteria as part of their defence mechanism
C. present in mammalian cells for degradation of DNA when the cell dies
D. used in genetic engineering for ligating two DNA molecules.