UPSC Social Work Questions and Answers is available here for the reference of Union Public Service Commission Exam applicants. The UPSC Social Work Syllabus and Exam Pattern will help the aspirants to identify the Subjects, type of questions, Marks allotted for each section, and Cut Off Marks. 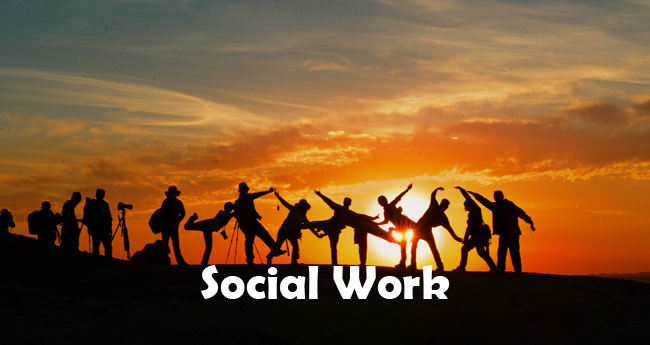 4. ……………….. from different states of Indian Union for national level organizations, can come together to establish a voluntary organization and start running it.
(A) Eight persons
(B) Nine persons
(C) Ten persons
(D) Eleven persons

7. Which one of the following theories assumes welfare is a legal or statutory responsibility of the employer ?
(A) Paternalistic theory
(B) Policing theory
(C) Philanthropic theory
(D) Placating theory

9. …………….. refers to benefits or services, which people receive in lieu of contributions to an insurance programme.
(A) Social welfare
(B) Social assistance
(C) Social service
(D) Social insurance

12. ‘To actualise the goal of cooperative federalism, competitive federalism and enable good governance in India’ is one of the key objectives of which agency ?
(A) UGC
(B) Niti Ayog
(C) PMO
(D) Start Up India

19. Human Rights could be generally defined as ……………. .
(A) Rights that are inherent in our nature
(B) Fundamental rights
(C) Rights without which human being cannot live
(D) All the above

27. Who was the Chairman of the Drafting Committee of the Indian Constitution ?
(A) Dr. Rajendra Prasad
(B) Dr. B. R. Ambedkar
(C) Mr. Vallabhbhai Patel
(D) Mr. Abdul Kalam Azad

29. The issues related with older people are addressed by the Central Government under the division of :
(A) Social Defence
(B) Social Aging
(C) Geriatrics
(D) Gerontology

31. Culturally determined characteristics associated with maleness or femaleness can be referred to as :
(A) Racial Discrimination
(B) Equality
(C) Women’s Liberation
(D) Gender

32. The addition of ……………… as a new disability under the Rights of Persons with Disabilities Act allowed a girl with this disorder to get admission to medical course.
(A) Mental Illness
(B) Depression
(C) Thalassemia
(D) Speech Disorder

34. Which of the following are not the functions of medical social worker ?
(A) Improving quality of life of patients and rehabilitation
(B) Social diagnosis and case work
(C) Counselling and advocating rights of patients
(D) Palliative care and prognosis

35. Mental hygiene movement was an outcome of …………. .
(A) Psychoanalytic approach
(B) Positive psychology
(C) The mind that found itself
(D) Dream analysis

37. Name the agency which was set up under one of the provisions of the NDPS Act to oversee the drug situation in India :
(A) Dangerous Drugs Control Agency
(B) Controller of Intoxicating Substances
(C) Narcotics Control Bureau
(D) Indian Bureau of Narcotic Drugs

40. Family Life Education does not include understanding of :
(A) Self and others
(B) Sexuality
(C) Political rights of citizens
(D) Marriage and parenthood

42. Which is not a division of the National Disaster Management Authority ?
(A) Policy and Planning
(B) Mitigation
(C) Operations and Communications
(D) Finance

43. Emergency response refers to :
(A) Actions undertaken as soon as a disaster strikes
(B) Actions taken after an emergency to help minimize the negative effects
(C) Actions coordinating first responders and volunteers after a disaster
(D) Actions taken by the State Administration