The Para Jumbles for CAT Question Papers are published here to help the CAT Exam applicants. A large number of aspirants are searching on the Internet for the Common Admission Test Para Jumbles Model Papers. 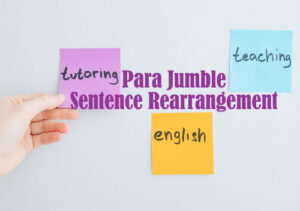 It is the right place for those CAT Sentence Rearrangement Previous Papers. Since, we are providing the valuable information about the Common Admission Test Para Jumbles Last Ten Years Exam Question Papers & Answers. Because we have given all the Sample Papers on Para Jumbles for CAT.

1. A. However, the rate of population increase is another important Factor to consider.
B. This change can be expressed in two ways.
C. Growth of population refers to the changes in the number of inhabitants of a country.
D. First, in terms of absolute numbers and second, in terms of percentage change.

2. 1. Zeolite is used in the purification (more correctly, softening) of water.
A. Such water finds it ‘hard’ or difficult to lather with ordinary washing soaps.
B. Further, when such water is used in boilers these salts form a coating on the walls.
C. This is because these salts react with the sodium compounds in water.
D. Water in some localities contains salt of Calcium, Magnesium and Iron present in the earth.
6. This could be seen even in household vessels which we use to boil water.

3. A. Here, the picture perfect French Quarter and heritage laden Tamil streets blend into one another.
B. The conflict of coexistence is evident in many metropolitan cities.
C. The old and new, like two different worlds, surviving side by side yet never crossing that chasm.
D. There is a place though Puducherry, where contrasts are celebrated like nowhere else.

4. 1. The Hubble Space Telescope (HST) has completed its measurement of the Hubble constant, a measure of how fast the Universe is expanding and a cornerstone of our understanding of the age and size of the Universe.
A. This idea of an expanding universe underpins the Big Bang theory, which says that the Universe began with an intense burst of energy and has been expanding ever since.
B. The final value of the constant seems to be just about accurate.
C. Measuring the rate of the Universe’s expansion requires calculating the acceleration of objects both near and far from us, and measuring the difference.
D. The finding marks the attainment of one of the HST’s primary goals.
6. Before the HST, the best estimates of the Hubble constant put the figure at either 50 or 100 kilometres per second per million par seconds.

5. 1. The most vulnerable section of the society are the students.
A. Revolutionary and new fledged ideas have a great appeal to them.
B. Agitations may be non-violent methods of protest.
C. They cannot resist the charm of persuasion.
D. They are to be taught that without discipline they cannot get proper education.
6. However if these become violent, the antisocial elements get encouraged and they put all proper working out of gear.

6. 1. By the year 2045, India will be number one in population size.
A. The birth rate in India as compared to that in China, is indeed on the rise, the study states.
B. A study conducted by an NGO has predicted that in another 44 years, China will lose the dubious distinction of being the most populated country in the world.
C. India’s population growth is 300 percent more than China’s and there is a need for an additional 5.5 million jobs a year, the study” further notes.
D. The birth rate in India is 22 per thousand compared to 2.2 in China.
6. China has had a more effective population policy than India, the study continues.

7. 1. Venice is a strange city.
A. There are about 400 odd bridges connecting the islands of Venice.
B. There are no motor ears, no horses and no buses there.
C. These small islands are close to one another.
D. It is not one island but a hundred islands.
6. This is because Venice has no streets.

8. A. The WHO has said there seems little chance that it will become a worldly pandemic, but it has issued an advisory alerting travelers to the disease.
B. Airports and airlines around the world have begun screening passengers and refusing entry to those displaying symptoms of the disease.
C. The illness begins with a high fever, chills, cough and breathing difficulties and apparently shows some resistance to conventional drugs.
D. A deadly virus of pneumonia is moving quickly around the globe, as infected travellers from parts of Asia spread the disease.
E. The mysterious respiratory disease is believed to have originated in China late last year, making hundreds ill.

9. 1. One of the most terrible battles of the American Civil War was fought in July 1863, at Gettysburg.
A. The chief speech on that occasion was given by Edward Everett, a celebrated orator.
B. Lincoln was asked to make a few remarks.
C. In November of that year a portion of the battlefield was dedicated as a final resting place for men of both armies who died there.
D. Everett’s speech lasted 2 hours; Lincon’s for 2 minutes; it was over almost before the crowd realized that it had begun.
6. But the Gettysburg speech, is now one of the world ‘s immortal pieces of literature.

10. A. Malthus saw only three ways of keeping down the population: moral restraint, vice and misery.
B. Vice i.e., birth control, he as a clergyman, viewed with abhorrence; there remained misery.
C. (For some reason we are not allowed to say that celibacy is against nature; the only reason I can think of is that it is not new.)
D. Moral restraint, he admitted, was not likely to be practised on a large scale.
E. The commonest objection to birth control is that it is against ‘nature’.

11. A. Indeed without such a higher dialectic, language would constantly be moving towards one or the other extreme and thus failing as a means of communication.
B. A survey of the prose of thought of the twentieth century reveals a certain rhythmic and even cyclic development.
C. This suggests that between the dialectic and the eristic elements themselves, there operates a higher dialectic.
D. In this development, we may detect, at each stage, a dialectic and an eristic aspect.
E. The idealist philosophers, taking the Hegelian System as their point of departure, found themselves confronted with the New Realism.

12. 1. The teacher training agency in England hopes to make teaching one of the top three professions.
A. They have also demanded that the campaign should be matched by improved pay scales, work load and morale so as to avoid recruitment problems with an aim to raise the image of the teaching profession.
B. A series of advertisements are now being screened showing famous people speaking about teachers they remember and admire.
C. An amount of $ 100 million has been set aside to combat the shortage of applicants for teacher training.
D. Teacher Unions have welcomed this campaign.
6. It is high time for the Indian Government also to think on similar lines and take steps to lift up the sinking morale of the teaching profession.