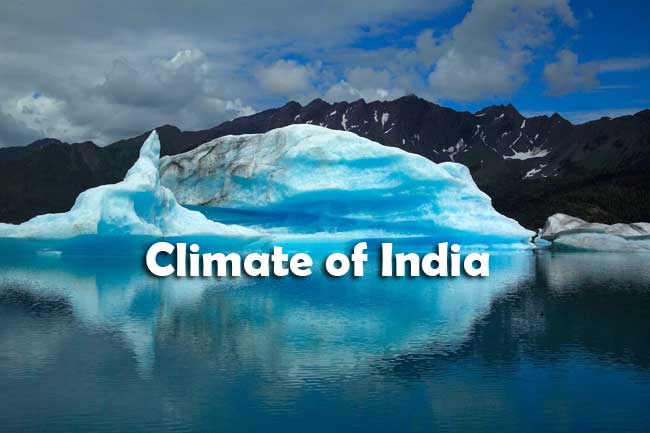 Also, check for download the Climate of India MCQ Papers with Solutions from the link provided below. The MCQs Climate of India Quiz helps you to prepare well for the exam topic wise and obtain very good marks.

Therefore, go through this post thoroughly and download the Climate of India Last Year MCQs Question Papers. All these questions on Climate of India are collected from previous year papers and compiled by us.

MCQs Questions and Answers on Climate of India

1. ‘Kalbaisakhi’ is a kind of
(A) cropping pattern
(B) ritual practised in Kerala
(C) cyclonic storm
(D) None of these

2. Which one of the following is the driest region in India?
(A) Telengana
(B) Marwar
(C) Vidarbha
(D) Marathwada

4. Western disturbances cause rainfall in the following Indian states during winter
(A) Punjab and Haryana
(B) Madhya Pradesh and Uttar Pradesh
(C) Kerala and Karnataka
(D) Bihar and West Bengal

5. Which of the following two States are prone to cyclones during retreating Monsoon season?
(A) Karnataka and Kerala
(B) Punjab and Haryana
(C) Bihar and Assam
(D) Andhra Pradesh and Orissa

6. Tropical cyclones in the Bay of Bengal are most frequent during
(A) October–November
(B) May–June
(C) January–February
(D) March–April

9. Heavy rainfall during the months of October and November is received by
(A) Gharo, Khasi and Jaintia hills
(B) Chota Nagpur Plateau
(C) Coromandel Coast
(D) Malwa Plateau

12. Which of the following is the area of lowest pressure over Indian subcontinent during the hot dry weather season ?
(A) RannofKachchh
(B) Rajasthan
(C) North-West India
(D) Meghalaya

13. The driest part of India is
(A) Western Rajasthan
(B) Jammu and Kashmir
(C) Gujarat
(D) Madhya Pradesh

14. Nagpur gets scanty rainfall because it is located with reference to Sahyadri Mountains, towards
(A) windward side
(B) seaward side
(C) onshore side
(D) leeward side

16. Mumbai receives more rainfall than Pune because
(A) Mumbai is on the windward side
(B) Pune is at a greater elevation
(C) Mumbai is a coastal city
(D) Pune has greater vegetation than Mumbai

17. Rajasthan revives very little rain because—
(A) it is too hot
(B) there is no water available and thus the winds remain dry
(C) the monsoon fails to reach this area
(D) the winds do not come across any barriers to cause the necessary uplift to cool the wind

18. Which of the following does not have an influence over the climate in India ?
(A) Monsoons
(B) Ocean currents
(C) Nearness to equator
(D) Presence of Indian ocean

19. The area with annual rainfall less than 50 cm in a year is
(A) Meghalaya
(B) Leh in Kashmir
(C) Coromandel coast
(D) Konkan coast

20. Which one of the following is the wettest place in India?
(A) Mahabaleshwar
(B) Cherrapunji
(C) Udhagamandalam
(D) Mawsynram

22. Which one of the following coasts of India is most affected by violent tropical cyclones ?
(A) Malabar
(B) Andhra
(C) Konkan
(D) Gujarat

23. One of the regions that receives rainfall from the North–Easterly monsoon is :
(A) West Bengal
(B) Assam
(C) Kerala
(D) Tamil Nadu

24. If 20% or more area of the country suffers from rain deficits during monsoon season, it is termed as
(A) flood year
(B) drought year
(C) famine year
(D) self sufficient year

25. What is the major cause of ‘October Heat’?
(A) Hot and dry weather
(B) Very low velocity winds
(C) Low pressure systems over the Indo–Gangetic plains
(D) High temperature associated with high humidity

27. Though there is no single theory which can explain the origin of south west monsoon, however it is believed that the main mechanism is the differential heating of land and sea during:
(A) Winter months
(B) Summer months
(C) Cyclonic storms
(D) South-west trade wind flow

28. Which of the following causes rainfall during winters in the north-western part of India ?
(A) Western disturbances
(B) Cyclonic depression
(C) Southwest monsoon
(D) Retreating monsoon

29. The Daily Weather Map of India is prepared and printed at
(A) Kolkata
(B) Mumbai
(C) New Delhi
(D) Pune