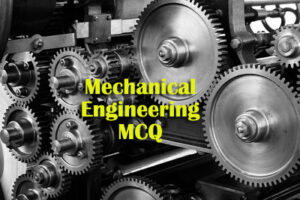 2. Kinematic pairs are those which have two elements that
(a) have line contact
(b) have surface contact
(c) permit relative motion
(d) are held together

3. In higher pair, the relative motion is
(a) purely rotary
(b) purely sliding
(c) purely turning
(d) combination of sliding and turning

7. Which gear is used for connecting two coplanar and intersecting shafts?
(a) Spur gear
(b) Helical gear
(c) Bevel gear
(d) None of these

8. A fixed gear having 200 teeth is in mesh with another gear having 50 teeth. The two gears are connected by an arm. The number of turns made by the smaller gear for one revolution of arm about the centre of bigger gear is
(a) 2
(b) 4
(c) 3
(d) None of these

10. Any point on a link connecting double slider crank chain will trace a
(a) Straight line
(b) Circle
(c) Ellipse
(d) Parabola

11. A universal joint is an example of
(a) Higher pair
(b) Lower pair
(c) Rolling pair
(d) Sliding pair

13. When the sleeve of a porter governor moves upwards, the governor speed
(a) Increases
(b) Decreases
(c) Remains unaffected
(d) First increases and then decreases

14. Idler pulley is used
(a) for changing the direction of motion of the belt
(b) for applying tension
(c) for increasing -velocity ratio
(d) all of these

18. The minimum number of links in a single degree-of-freedom planar mechanism with both higher and lower kinematic pairs is
(a) 2
(b) 3
(c) 4
(d) 5

20. For a governor running at constant speed, what is the value of the force acting on the sleeve?
(a) Zero
(b) Variable depending upon the load
(c) Maximum
(d) Minimum

22. Which one of the following governors is used to drive a gramophone?
(a) Watt governor
(b) Porter governor
(c) Pickering governor
(d) Hartnell governor

23. A system in dynamic balance implies that
(a) the system is critically damped
(b) there is no critical speed in the system
(c) the system is also statically balanced
(d) there will be absolutely no wear of bearings

26. Off set is provided to a cam follower mechanism to
(a) Minimise the side thrust
(b) Accelerate
(c) Avoid jerk
(d) None of these

27. When the driving torque is more than load torque, flywheel is ______
(a) Accelerated
(b) Decelerated
(c) Constant velocity
(d) Can’t be determined

28. Which of the following factors are not responsible for unbalancing in rotating systems?
(a) Errors
(b) Tolerances
(c) Shape of the rotor
(d) None of these

31. Torsional vibrations are said to occur when the particles of a body moves
(a) Perpendicular to its axis
(b) Parallel to its axis
(c) In a circle about its axis
(d) None of these

32. When _______ occurs below a critical power input the gas bubbles are not affected laterally but move upward.
(a) Weeping
(b) Flooding
(c) Mixing
(d) Entrainment

33. The critical speed of a rotating shaft depends upon
(a) Mass
(b) Stiffness
(c) Mass and Stiffness
(d) Mass, Stiffness and eccentricity

40. The pitch of threads on a lock nut in comparison to pitch of nut is
(a) Same
(b) Coarser
(c) Finer
(d) Very coarse

44. Which one of the following causes the whirling of shafts?
(a) Non-homogeneity of shaft material
(b) Misalignment of bearings
(c) Fluctuation of speed
(d) Internal damping

45. The size of a gear is usually specified by
(a) pressure angle
(b) circular pitch
(c) diametral pitch
(d) pitch circle diameter

46. Stress concentration in static loading is more serious in
(a) ductile materials
(b) brittle materials
(c) equally serious in both cases
(d) depends on other factors

48. A key connecting a flange coupling to a shaft is likely to fail in
(a) Shear
(b) Tension
(c) torsion
(d) bending

49. Which one of the following is not a friction clutch?
(a) Disc or plate clutch
(b) Cone clutch
(c) Centrifugal clutch
(d) Jaw clutch