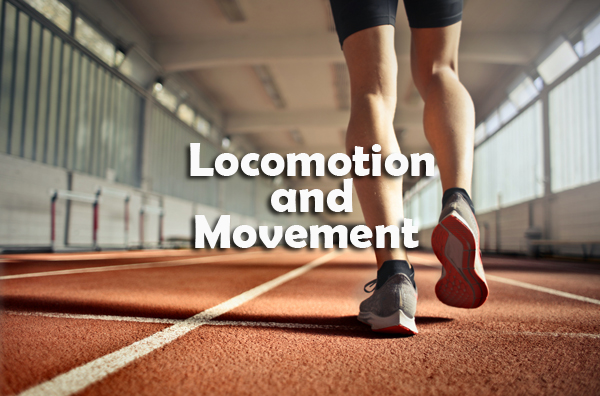 MCQ on Locomotion and Movement

3. The striated appearance of a myofibril is due to the distribution pattern of-
A. fascicles
B. actin and myosin
C. meromyosin
D. troponin

4. The ‘U’ shaped bone present at the base of the buccal cavity is—
A. Malleus
B. Ethmoid
C. Sphenoid
D. hyoid

5. Knee joint is an example for-
A. hinge joint
B. ball and socket joint
C. gliding joint
D. pivot joint

7. Which one of the following is not a synovial joint?
A. Ball and socket joint
B. Pivot joint
C. Sutures forming the cranium
D. Hinge joint

8. In which of the following conditions, bone matrix is not reduced?
A. Osteomalacia
B. Osteoporosis
C. Hyperparathyroidism
D. None of these

9. An acromion process is characteristically found in the—
A. pelvic girdle of reptiles
B. skull of frog
C. vertebrae of birds
D. pectoral girdle of mammals.

10. Select the correct statement with respect to locomotion in humans—
A. The vertebral column has 10 thoracic vertebrae.
B. The joint between adjacent vertebrae is a fibrous joint.
C. Accumulation of uric acid crystals in joints causes their inflammation.
D. A decreased level of progesterone causes osteoporosis in old people.

11. Select the correct statement with respect to disorders of muscles in humans—
A. Failure of neuromuscular transmission in myasthenia gravis can prevent normal swallowing.
B. Accumulation of urea and creatine in the joints causes their inflammation.
C. An overdose of vitamin D causes osteoporosis.
D. Rapid contractions of skeletal muscles cause muscle dystrophy.

13. During muscle contraction in humans, the—
A. sarcomere does not shorten
B. a band remains same
C. A, H and l band shorten
D. actin filaments, shorten

16. Select the correct statement regarding the specific disorder of muscular skeletal system.
A. Muscular dystrophy—age related shortening of muscles
B. Gout—inflammation of joints due to extra deposition of calcium.
C. Osteoporosis-decrease in bone mass and higher chances of fractures with advancing age.
D. Myasthenia gravis—autoimmune disorder which inhibits sliding of myosin filaments.

17. Which one of the following pairs of chemical substances, is correctly categorised?
A. Calcitonin and thymosin—Thyroid hormones.
B. Pepsin and pr0lactin—Two digestive enzymes secreted in stomach.
C. Secretin and rhodopsin—Polypeptide hormones
D. Troponin and myosin—Complex proteins in striated muscles.

19. Gout is caused due to the accumulation of—
A. oxalic acid
B. uric acid
C. calcium carbonate
D. lactic acid

20. Myoglobin is present in—
A. Heart
B. Kidney
C. muscles
D. nerve cells

24. The important muscle proteins that help in movement are-
A. actin and myosin
B. tropomyosin
C. troponin
D. all of these

25. The ‘thick’ filament in muscles is polymerised protein of—
A. Meromyosins
B. Actins
C. Troponins
D. keratin

26. In a muscle, the functional unit of contraction is the-
A. portion of myofibril between two successive ‘Z’ lines
B. I band
C. A band
D. l band with a Z line

28. Name the ion responsible for unmasking of active sites for myosin for cross-bridge activity during muscle contraction—
A. potassium
B. magnesium
C. sodium
D. calcium

29. Osteoporosis, an age-related disease of skeletal system, may occur due to—
A. decreased level of estrogen
B. high concentration of Ca++ and Na++
C. accumulation of uric acid leading to inflammation of joints.
D. immune disorder affecting neuro muscular junction leading to fatigue.

30. Lack of relaxation between successive stimuli in sustained muscle contraction is known as—
A. spasm
B. tonus
C. fatigue
D. tetanus

32. Egg The collagenous connective tissue layer holding the muscle bundles together is—
A. Pleura
B. Sarcolemma
C. Fasia
D. pericardium

33. Anaerobic breakdown of glycogen due to repeated activation of muscles leads to the accumulation of—
A. uric acid
B. lactic acid
C. phenylalanine
D. glutamic acid

35. Which of the following joints will not allow movement?
A. Fibrous joint
B. Cartilaginous joint
C. Synovial joint
D. Ball and socket joint

37. Which of the following bones does not articulate with any other bone?
A. Humerus
B. Malleus
C. Phalanges
D. Hyoid

38. The amoeboid movement results from—
A. interactions among actin, myosin and ATP etc.
B. co-ordianted beats of cilia
C. Whip like action of flagella.
D. action by the mitotic spindle, similar to what happens during mitosis and meiosis.

39. The lumbar region of the vertebral column in man is made up of—
A. 7 vertebrae
B. 1 fused vertebrae
C. 5 vertebrae
D. 12 vertebrae

41. Glinding joint is present between-
A. Carpals
B. humerus and pectoral girdle
C. knee
D. carpals and metacarpals

42. The skeletal muscle fibre is a ‘syncytium’ which means it is—
A. long and slender
B. swollen in the middle with tapered ends
C. multinucleated
D. made up of many fibers

43. Stimulation of a muscle fibre by a motor neuron occurs at—
A. the transverse tubules
B. the myofibril
C. the neuro-muscular function
D. the sacroplasmic reticulum

47. Which of the following is not involved in muscular contraction-
A. calcium ion
B. magnesium ion
C. actin
D. none of these

48. Choose the correct option regarding a normal human—
A. The skull is dicondylic.
B. Metacarpals are five in numbers.
C. Patella is a cup-shaped bone covering the knee dorsally.
D. Scapula is a large triangular flat bone, situated on the ventral side of the thorax.
E. The pelvic girdle has two coxal bones.
A. A and E alone are wrong
B. A and B are wrong
C. C and D are wrong
D. E alone is wrong

50. A bone is connected to another by—
A. Tendon
B. Ligament
C. Cartilage
D. muscle