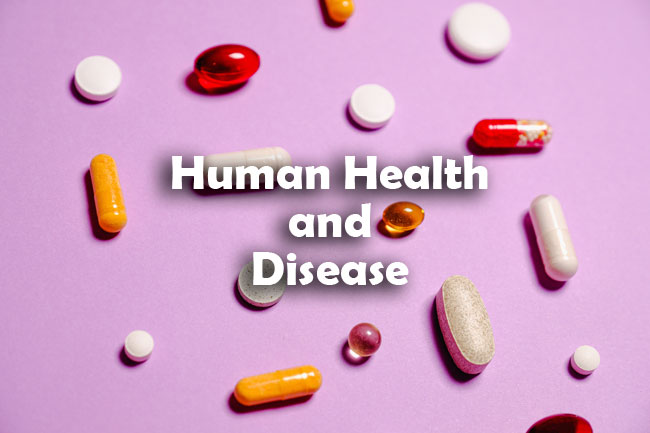 MCQ on Human Health and Disease

4. Which of the following is correct regarding AIDS causative agent HIV?
(i) HIV is enveloped virus containing one molecule of single-stranded RNA and one molecule of reverse transcriptase.
(ii) HIV is enveloped virus that contains two identical molecules of single-stranded RNA and two molecules of reverse transcriptase.
(iii) HIV is unenveloped retrovirus.
(iv) HIV does not escape but attacks the acquired immune response.
A. (ii) & (iii)
B. (i) & (iii)
C. (ii) & (iv)
D. (i) & (iv)

5. Which of the following sets of diseases is caused by bacteria?
A. Cholera and tetanus
B. Typhoid and small pox
C. Tetanus and mumps
D. Herpes and influenza

7. In higher vertebrates, the immune system can distinguish self-cells and non-self. If this property is lost due to genetic abnormality and it attacks self-cells, then it leads to—
A. autoimmune disease
B. active immunity
C. allergic response
D. graft rejection

10. Short-lived immunity acquired from mother to foetus across the placenta or through mother’s milk to the infant is categorised as—
A. passive immunity
B. active immunity
C. autoimmunity
D. CMI

11. Morphine, used as an analgesic is obtained from—-
A. Erythroxylum coca
B. Atropa belladonna
C. Papaver somniferum
D. Cannabis safiva

12. A doctor identifies symptoms of nasal congestion, headache, sore throat, hoarseness, cough in a patient. The conclusion is that, the patient is infected by a pathogen-
A. Plasmodium
B. Adeno virus
C. Salmonella
D. Rhino virus

13. Some of the events occur during life cycle of Plasmodium are given below. Identify the correct statement.
A. Female mosquito take up sporozoites with blood meal.
B. The sporozites reproduce sexually in liver cells.
C. When mosquito bites a man, gametocytes are injected.
D. The gametocytes develop in RBC.

14. Identify the incorrect statement from the following.
A. B-cells produced antibody
B. Macrophages are the phagocytic cell.
C. Interferons kill viruses
D. Response of T-cells is called cell mediated

18. Which of the following pathogens is not transmitted by a vector?
A. Salmonella typhi
B. AIpha virus
C. Plasmodium
D. Wuchereria bancrofti

20. If you suspect major deficiency of antibodies in a person, to which of the following would you look for confirmatory evidence?
A. Haemocytes
B. Serum globulins
C. Fibrinogen in plasma
D. Serum albumins

21. Which of the following immunoglobulins does constitute the largest percentage in human milk?
A. IgG
B. IgA
C. IgM
D. IgD

22. Which of the following diseases is caused by a protozoan?
A. Babesiosis
B. Blastomycosis
C. Syphilis
D. Influenza

25. Which one of the following is a causative agent of plague?
A. Shigella flemeri
B. Bordetella pertussis
C. Staphylococcus aureus
D. Yersinia pestis

28. Ringworms are caused by—
I. Wuchereria
II. Microsporum
III. Haemophilus
IV. Epidermophyton
A. I and II
B. II and III
C. II and IV
D. I and IV

29. The cytokine barrier among these is—
A. Polymorphonuclear neutrophil
B. Monocyte
C. NK cell
D. Interferon

30. Which is not correct with respect to Malaria-
A. Malignant malaria is caused by Plasmodium falciparum.
B. Female Anopheles mosquito is the vector.
C. Sporozoites multiply in blood.
D. RBCs rupture and release haemizoin which causes chills.

32. Which of the following best explains the difference between an epitope and an antigen?
A. An epitope is any foreign substance; an antigen is a foreign protein.
B. An epitope is the part of an antigen where an antibody or lymphocyte receptor binds.
C. An antigen is the part of an epitope where an antibody or lymphocyte receptor bind.
D. Antigens are recognised by B cells and antibodies; epitopes are regognised by T cells.

33. Which of the following antibodies is pentameric?
A. IgA
B. IgD
C. IgE
D. IgM

35. The infective stage of malarial parasite is called-
A. Sporozoite
B. Cryptozoite
C. Trophozoite
D. merozoite

36. When are interferons secreted in the body?
A. When antibody reacts with antigen in our body.
B. When serotonin becomes active.
C. When lymphocytes become active.
D. When the cells are infected by virus.

37. The plasmodium initially multiplies within the liver cells and then attacks the red blood cells, resulting in their rupture. The rupture of RBCs is associated with release of a toxic substance—
A. Hirudin
B. Heparin
C. Heptoin
D. haemozoin

39. Which type of white blood cells are concerned with the release of histamine and the natural anticoagulant heparin?
A. Monocytes
B. Neutrophils
C. Basophils
D. Eosinophis

41. The blood does not clot inside the body because of—
A. oxygenation of blood
B. movement of blood
C. presence of heparin in blood
D. absence of fibrinogen in blood

42. The letter ‘T‘ in T-lymphocyte refers to—
A. Thyroid
B. Thymus
C. Thalamus
D. tonsil

43. Which of the following is an autoimmune disease?
A. Muscular dystrophy
B. Gouty arthritis
C. Rheumatoid arthritis
D. Tay Sach’s disease

45. Which of the following drugs acts by interfering with dopamine communication?
A. Cocaine
B. Cannabinoids
C. Opioids
D. Hallucinogens

47. Which of the following statements is correct-
A. Benign tumours show the property of metastasis
B. Heroin accelerates body functions
C. Malignant tumour exhibits metastasis
D. Patients who have undergone surgery are given cannabinoids

48. Which of the following diseases is not treated by inactivated Whole Agent Vaccine
A. Hepatitis-A
B. Bubonic plague
C. Cholera
D. Typhoid